Courage is resistance to fear, mastery of fear, not the absence of fear.

What a difference a quarter makes; from the highs of September the market plumbed new lows in December!  As of our last missive, we had expected early 4th quarter negativity to give way to a year-end rally.  Instead, the market experienced even greater negative volatility.  Over the course of the quarter equities declined significantly led by a precipitous twenty percent drop in U.S. small cap stocks over the period.  While the market experienced some significant point moves in December the charts below illustrate the difference between perception and reality.  While the market move on December 26th was significant and now ranks first on the chart profiling the largest “point” moves by the S&P 500…the second chart demonstrates from a “percentage” standpoint (what really matters from a portfolio perspective) that the December move didn’t even crack the top ten.  In fact, it didn’t even make the top twenty instead placing a distant thirty eighth which, while not exactly insignificant, is somewhat anticlimactic. 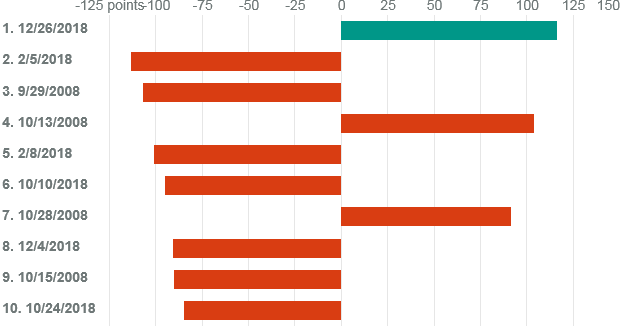 However, it was quite a large move for a holiday week and we are grateful; for without it, the negative impact of December would have been that much greater!  As it was December 2018 now has the dubious honor of being the worst December, in terms of the Dow Jones Industrial Average, since 1931.

International equities also declined significantly in the fourth quarter. The fourth quarter decline though not as dramatic as their U.S. counterparts caused International markets to close out the year in even worse shape than U.S. Markets.  The MSCI EAFE fell over 12.5% and ended the year down 13.79% closely followed by Emerging Markets Equities which closed out the year down 14.2%.  U.S. and International REITs declined as well and ended the year in negative territory providing equity investors little shelter in this particular storm.  DFA (Dimensional Fund Advisors) noted that when considering the MSCI All Country World Index as a proxy for the equity basket 46 of 47 countries equity markets were down for the year.  Every developed market in the index experienced a negative return and among emerging markets only Qatar was positive.  So despite the global economic recovery of late 2017 and early 2018 markets rolled over and the latter part of the year was dismal to behold.

Despite the FED hiking rates at their December meeting bond markets managed to stage a very late year rally.  The Barclays U.S. Aggregate bond index reversed its negative trend rallying 1.64% in the fourth quarter to end the year with a positive return of 0.01%.  As we survey the year, it is safe to say that cash was king in 2018, and global diversification did not provide much help for U.S. Investors. 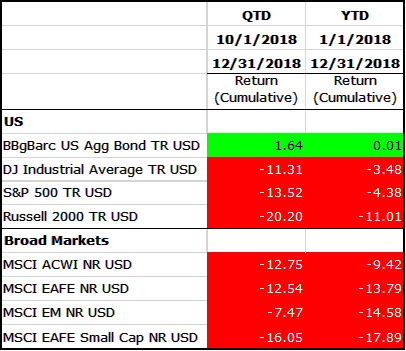 Cornerstone portfolios were not immune to the late year slump and despite strong performance from several of our equity managers and an underweight to both international developed markets and emerging markets equities our portfolio returns were also negative.  The rally in bonds helped as did our “cash plus” allocation, but it was a disappointing end to a year in which global diversification added little value.

Surprisingly, despite the poor end to the year from a market perspective, the U.S. economy continued to hum along with unemployment remaining at extremely low levels between 3.7-3.9% (It would likely have declined below 3.7% but labor force participation increased significantly later in the year.).  Corporate earnings for the third quarter were very strong and inflation remained relatively benign. While the November election results favored Democrats there was no “landslide” victory and consequently neither party has a “mandate” at this point. The FED met in mid-December and raised interest rates as expected.  The short term FED Funds rate is now held between 2.25-2.5%.  It seemed as though investors increasingly focused on more questionable late quarter economic data, fears related to a government shutdown, Brexit, and U.S. China trade relations.  As fears grew the market sell-off intensified ultimately culminating in whipsaw action over the holiday week.  Of course, as of this writing markets have already begun to rally and have gained back much of what was lost at the end of the fourth quarter.  Given this strong comeback, it now seems that the fears so prevalent at the end of the fourth quarter are a distant memory, so too the negative trend to the market.  As we enter 2019 the market’s rebound has been pervasive extending broadly across both domestic and international equites. It seems as though investors have taken the “pause” in the U.S. China trade war, a temporary truce if you will, as a positive omen, and along with the possibility of a more dovish stance by the FED, are prepared to give the market a clean bill of health and send it off to the races in 2019.  Market strategists also seem to be on board with a positive outlook for 2019.  Barron’s pole of 10 market strategists indicates a rosy outlook and an average expected gain in the S&P 500 of more than 14%.  Further those same strategists believe the U.S. Economy will continue to expand by approximately 2.5% in 2019 and now expect the FED to be more dovish than was expected just a few months ago.  We find it interesting that Barron’s also engaged an additional group primarily made up of portfolio managers and they also are rather bullish regarding 2019 prospects.  While they expect some weakness in the early part of the year they see the clouds parting, the U.S. and China negotiating a deal, the U.S. economy growing, and equity markets moving higher in the second half of the year.   Given these summaries along with our other reading it may be safe to say that, with a few notable exceptions, most of the large firms and their strategists are positive regarding the outlook for 2019.

However, we are not so sanguine on either the global economy or global equity markets.  The U.S. expansion, which began in June of 2009, is rapidly aging and we are concerned that the end is near.  Portfolios have indeed recaptured 60-70% of the losses experienced in the 4th quarter and for that we are grateful.  However, we remain unconvinced that this bounce is not the last gasp of a fading bull market.

In our view the credit cycle is not dead, trees don’t grow to the sky, and market strategists have a positive bias.  In general we also have a positive bias!  Stocks go up seventy percent of the time, economies do grow, and  we see no real benefit to continual bearish predictions.  However, the “cracks’ in the U.S. economy are becoming more pervasive and widening at the same time.  From a monetary policy standpoint the U.S Federal reserve has raised rates 9 times in this tightening cycle from an effective rate of 0-0.25% to 2.25%-2.5% while at the same time eliminating nearly four hundred billion dollars in debt from their balance sheet.  The QT (quantitative tightening) is ongoing and amounts to fifty billion dollars per month or six hundred billion dollars per year.  In our view this fact coupled with rising rates limits liquidity and raises the cost of capital.  Ultimately tightening monetary conditions will act as a break on the U.S. economy, the trillion dollar question is: When?  We believe the tightening effect is already being felt. Homebuilders failed to confirm the early Fall rally, and mortgage applications are down.  U.S. corporations have built up a significant amount of debt in the last few years.  Corporations used the bulk of this capital to pad their balance sheets and to re-purchase their shares driving earnings higher.  Due to recent price declines this has actually pushed down P/E multiples making the market look more attractive from a valuation perspective.  Unfortunately, although earnings have grown dramatically in the last eighteen months equity prices over the last five years have dramatically outpaced earnings and this recent correction has not alleviated the broader problem of slowing earnings growth and rising rate pressure. In our view, Corporate profits seem to have peaked for this cycle and corporations are now facing four major headwinds: rising refinancing costs, rising labor costs, a strong dollar, and a slowing global economy…we could add the trade war to this list as well. 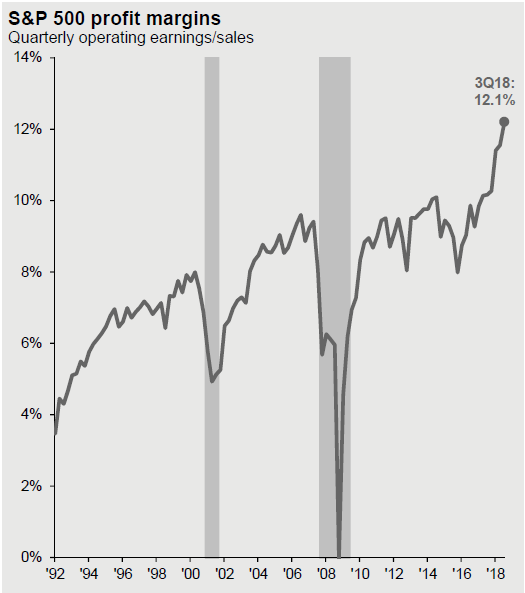 Further the fiscal stimulus provided by the U.S. Corporate tax cut is waning.  Consequently, we find it difficult to make the case for equity prices to move dramatically higher in 2019.
Our concerns have led to caution on the part of our investment committee.  As we previously noted markets go up approximately seventy percent of the time, and an outright underweight to equities often comes at a significant cost to investors.  Therefore barring changes in risk tolerance Cornerstone has not chosen to move to an equity underweight, rather we have chosen to capitalize on the significant divergence between growth and value strategies that has emerged over the last few years.  The spread between these strategies is historically wide, further in our active portfolios our more defensive value oriented managers have accumulated cash as richer valuations have made it more difficult for them to deploy capital.  Consequently we are tilting portfolios more toward value while at the same time retaining our defensive tilt in fixed income strategies as well.  Should the yield curve flatten further we may begin to extend duration in our fixed income portfolios but currently we believe that our defensive tilt costs the portfolios very little and offers protection from an inflation induced rise in interest rates. 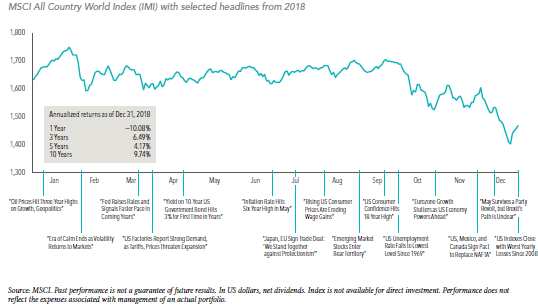 2018 came in with bang and went out with a whimper.  Global asset allocation strategies struggled throughout the year relative to U.S.  large cap domestic equities.  To this point 2019 is also off to a great start, however, we remain cautious.  Valuations are not overly attractive, macro conditions are, at best, decelerating, interest rates are still rising, corporate debt burdens are high, and the trade war has not yet been concluded.  Despite these more negative facts the U.S. economy is still growing, unemployment is low, wages are rising, inflation is contained, and the consumer is quite healthy.  We view risks as tilted toward the downside, but our current outlook is not all doom and gloom.  The current rally may persist and the expansion may muddle on into 2020.  Regardless, relying on a crystal ball is rarely a winning strategy.  Consequently, we will continue to rely on our strategic asset allocation approach to help mitigate volatility and provide the long term returns we are seeking while employing the value and fixed income tilts indicated to add additional protection to our portfolios in what we expect to be a challenging year to come.