Whoso would be a man, must be a non-conformist…Nothing is at last sacred but the integrity of your own mind.

After the disastrous decline of the fourth quarter compounded by a dismal December, the first quarter provided welcome relief to beleaguered equity holders.  In the face of ongoing concerns including a slowing economy, weakening corporate earnings, rising labor costs, and an ongoing trade war, equities rapidly reversed course and moved higher in early 2019.  For much of the quarter, global equities climbed the proverbial “wall of worry” by moving higher despite the head winds. As the quarter progressed, reassuring language from the FED and improvement on the trade front allowed equities to continue their advance and end the quarter flirting with the record highs set back in September 2018.

Throughout the first quarter, domestic equities continued to dominate their international counterparts. However, both foreign and domestic stocks provided outstanding results.  Surprisingly, REITs led the way in early 2019 up over 16% in the first quarter.  REITs were followed closely by U.S. small cap stocks up nearly 15% over the same period.  The S&P 500 and the Dow Jones Industrial Index were not far behind, turning in returns of 13.65% and 11.81%, respectively.  Index returns were broad-based although later in the quarter the “FANG” (Facebook, Amazon, Netflix, and Google) stocks along with the technology sector in general led markets higher.  Despite solid performance early in the quarter, value stocks once again lost ground to their more growth oriented brethren and active management teams struggled to keep up in a red-hot stock market!

The dollar was little changed during the first quarter of 2019, providing some respite for battered international and emerging markets equities. 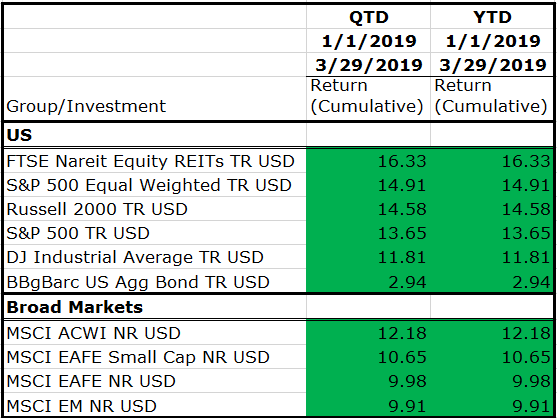 Although not quite as strong as the S&P 500, the MSCI EAFE was still up in double digits in the first quarter posting a return of nearly 11%.  Emerging markets equities rallied as well ending the quarter up nearly 10%.

Bonds also rallied across the quality and maturity spectrum; the Barclays U.S. Aggregate Bond Index ended the quarter up nearly 3%.  High yield bonds had a particularly good quarter.  The Barclays U.S. Corporate High Yield Bond Index was up 7.50% during the quarter nearly keeping up with equities, and in that bond rally lies the real story of the first quarter of 2019.

The first quarter of 2019 can be summed up in two words: “Federal Reserve.”  The U.S. central bank was, in our view, the key to the massive rally in equities and fixed income during the first quarter.  The FED made a dovish pivot early in 2019, setting the stage for a significant interest rate adjustment and a subsequent rally in intermediate and longer dated bonds and at the same time touching off an equity rally driven by the prospect of easier monetary policy.

Late in the 4th quarter of 2018 the FED hiked interest rates for the 9th time at their December meeting signaling their belief in the strength of the economy and indicating that monetary policy should continue to  tighten before reaching a “neutral” state.  As we noted in our 4th quarter commentary, equity markets, which were already correcting, went on to experience the worst December since 1931.  Hardly a reassuring experience for either the FED, the President of the United States, or the average investor.  Subsequently, the FED did an abrupt “about face” noting in its January meeting statement that additional patience and a focus on incoming economic data would be required in determining the path of future rate hikes.  Many took this as a sign that the FED was caving to the demands of a vocal president and fearful investors.  However, it should also be noted that the FED itself referenced a slowdown in the global economy and other signs of tightening monetary conditions across the U.S. financial marketplace.  We believe these latter elements provide a truer reflection of the forces impacting the FED’s decision.  Interest rates around the world remain extremely low primarily because other central banks have been slower than the FED to move monetary policy from accommodative to neutral. 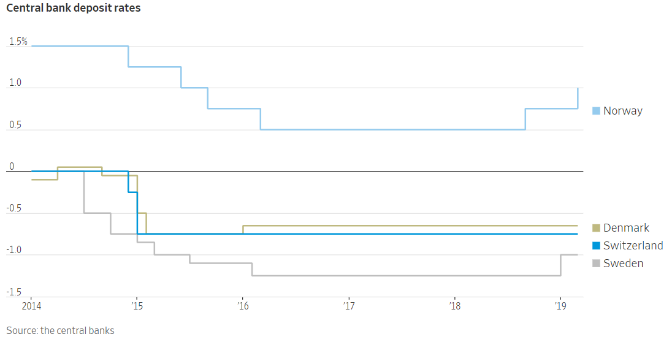 Nearly 10 trillion in government debt remains below the zero bound, and while China has actively re-engaged in accommodative monetary policy, the ECB and the Japanese central bank also remain extremely accommodative.  Consequently, the tightening bias at the FED coupled with its ongoing balance sheet reduction program (QT) has not only raised U.S. interest rates but also tightened monetary conditions and raised the value of the dollar relative to other major currencies.  With Brexit still up in the air, a rapidly slowing Chinese economy, Italy in recession, and Germany on the brink is it any wonder that the FED chose to pause?  While we were surprised at the rapid change of direction by the FED, we have previously noted that we did not believe that the FED funds rate would get much above 3% during this economic cycle.  Given the FED’s continued dovish comments following the March meeting, it would appear that we may be correct.  The majority of FED Governors have altered their position to reflect no rate hikes for the remainder of 2019. Further expectations for the FED funds rate over the next couple of years have also dropped significantly and are now below 3% in 2021.  With the possible exception of the labor market, the FED also noted a softening in U.S. economic data.  This softening echoes or precedes, depending on your view, the rising chance of recession reflected in many financial firms recession prediction models.  Manufacturing indexes around the world have weakened.  Real estate markets in the U.S. and elsewhere have begun to flatten out, and commodity prices are far from strong and in many cases are declining.  Finally, at the end of the quarter, we experienced a distinct yield curve inversion with the 10 year yield briefly dropping below the yield on the three month T-Bill.

Historically, this indicator, while not perfect, has preceded every major recession in the post WWII period. 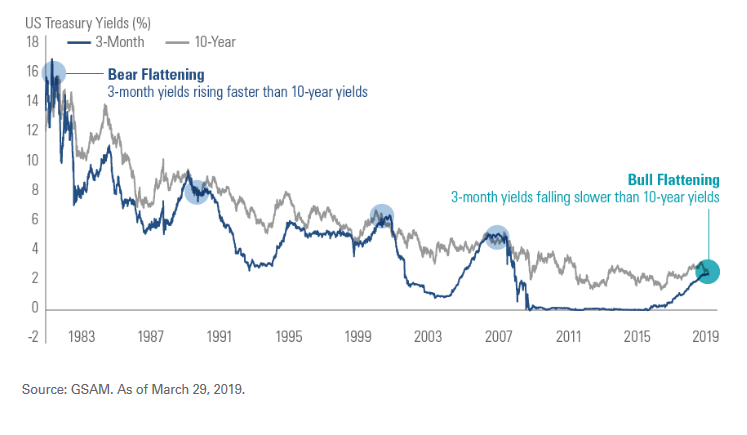 Despite these economic concerns, the caution of the FED, Brexit, and an ongoing trade war with China, equity markets around the world rose and bonds also provided a positive return…odd that these two asset classes should be forecasting such different results…or is it?

As the chart above indicates, markets often continue to rally following the last cyclical rate hike put in place by the FED.  Economies don’t turn on a dime.  The U.S. economy is driven in large part by consumers.  In fact, approximately 70% of GDP growth is consumer driven. Other developed economies have similar statistics.  Here in the U.S the consumer is doing quite well.  Unemployment, a trailing economic indicator, remains extremely low and compensation rates are slowly rising.  Consumers have done a great job restructuring and paying down debt in the wake of the Great Recession and are in relatively good shape.  It seems to us that consumers and investors are both focused on the same data points.  They believe the consumer is healthy and that the FED’s dovish tilt coupled with a Chinese trade deal will be enough to push the can down the road and keep the U.S. economy and stock market humming. 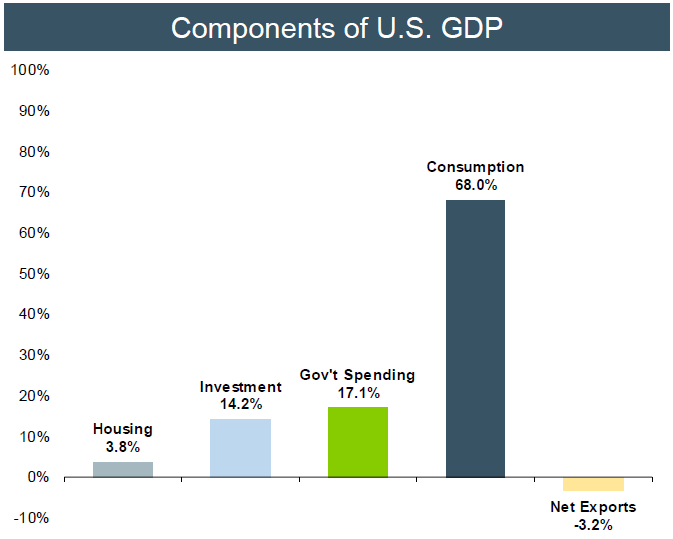 Unfortunately, we are not so sanguine.  We believe that the headwinds facing U.S. corporations are enough to send the U.S. economy into a shallow recession late in 2019 or early 2020.  Such recessions are generally preceded and/or accompanied by a decline in equity prices.  We believe the end of this economic cycle will be no exception.  While it is certainly possible that the FED could engineer a true “soft landing,” such events are almost as rare as unicorns.  We like unicorns as much as the next guy and we like soft landing even better, but we recognize that like capturing a unicorn, experiencing a soft landing may be a pretty rare experience.  Consequently, we will hope for the best while attempting to prepare for the worst.  In light of our more negative expectations and our view that U.S. equities have little upside potential and significant downside potential, we have instituted a tilt toward value strategies in our investment portfolios at Cornerstone Management.  Given the outperformance of growth over the last few years, we believe that significant protection exists in value-oriented stocks.  Further, our active managers have been adding to their cash positions.  While this additional cash has limited their ability to match the market during its recent ascent, it provided significant protection during the fourth quarter of 2018 and we expect it to provide additional protection in the event that we do experience a significant decline in equities in the near future.  This recently implemented equity tilt coupled with our previously initiated defensive position in the fixed income portion of our portfolios should help dampen portfolio volatility while still allowing our portfolios to participate in a portion of the ongoing equity market rally.

U.S. corporations have already lowered earnings expectations, and it appears to us that profit margins have already peaked for this cycle.  The recent run up in prices has driven equity valuations higher at a time when it is becoming increasingly difficult for companies to increase earnings through top-line revenue growth.  Higher interest rates make financial engineering less rewarding, labor costs are rising, and foreign economies are slowing…not exactly the environment one would pick for a massive equity rally.  Stocks do go up over 70% of the time and it may be too soon to call this equity rally over, but we are concerned that the end is near. We would echo the sentiments expressed by Barron’s Tae Kim on the eve of the S&P 500 hitting a new high as we go to print: “This will all end in tears.”