It wasn’t raining when Noah built the Ark.

The second quarter of 2019 proved to be quite interesting for investors.  The first quarter rally continued into April only to be followed by a scary drop in May precipitated by aggressive trade rhetoric and recessionary fears.  U.S. Fed Chair Jerome Powell came quickly to the rescue reassuring markets that the Fed would adjust policy as necessary to protect the U.S. economy from harm.  His comments not only reassured the market; they kicked off a strong relief rally in equities. His hints of a rate cut due to slower than expected economic growth also impacted the bond market.  Interest rates declined across the yield spectrum and the yield curve inverted for the second time this year. The front end of the curve has remained inverted casting doubt on the Fed’s ability to engineer a soft landing and keep the U.S. economy from dipping into recession.  Amidst the fireworks, quarterly returns were quite strong with the S&P 500 up over 4% during the quarter and the Dow not far behind up nearly 3.25% over the same period. So much for the old dictum: “Sell in May and go away”! In fact, equities continued their march upward with both the S&P 500 and the Dow hitting new highs in early July.

International markets strengthened as well on comments from the EU Central Bank Chair Mario Drahgi indicating that the Bank would provide whatever support was necessary to ensure that the Eurozone economy continued to grow.  Similar to the Fed’s response in the U.S., his comments reassured equity investors and led to another drop in interest rates across Europe. It is difficult to fathom that over 13 Trillion, yes that’s Trillion with a “T” in debt worldwide is priced to yield nothing to the owner.  A historical event indeed, when one loans money with the expectation of a negative return for the trouble. 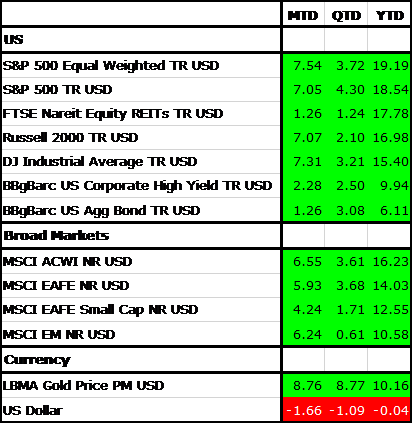 Australasia and Far East (MSCI EAFE) Index was up 3.68% during the quarter in dollar terms outpacing the Dow but coming in slightly behind the S&P 500.  For the year, U.S. Large Caps continue to significantly outperform their international counterparts in dollar terms. Emerging market equities have not done quite as well this year.  Despite a strong rally in June emerging market equities were up under 1% during the quarter and “only” 10.58% for the year…any other time we might be happy with a 10% return half way through the calendar year, but in the present circumstances it barely registers.

The significant drop in yields during the latter part of the quarter brought about a significant bond market rally.  Spreads widened significantly early in the quarter on economic concerns. However, comments by the Fed and ECB seemed to reassure markets that we are still in a “risk on” environment and high yield spreads tightened back up.  The Barclay’s High Yield index ended the quarter up 2.5% bringing its year to date return to just under 10%. Investment grade bonds have also done well in 2019. The Barclay’s Aggregate bond index is up 6.11% this year, and longer duration indexes have experienced double digit rallies. 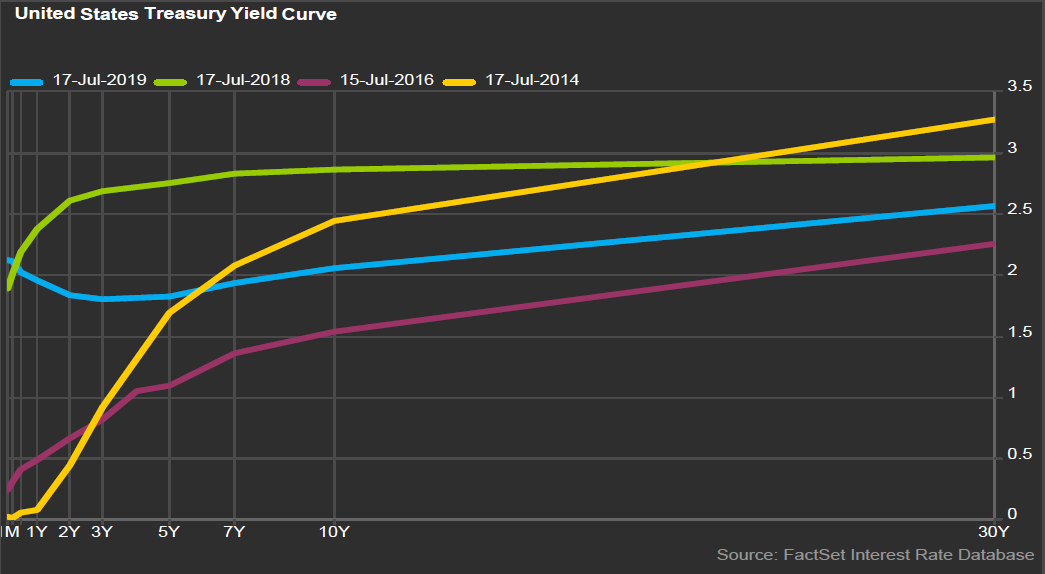 The drop in rates produced another yield curve inversion between the 3 Month T-bill and the Ten Year Treasury Bond.  An inverted yield curve has preceded every post-WWII recession in the U.S. Typically the length of the inversion has helped determine the validity of the signal.  The U.S. experienced a brief inversion at the end of the first quarter, but this second inversion lasted significantly longer. Further, the 2-10 spread (the difference between the Two Year U.S. Treasury Note and the U.S. Treasury Ten Year Bond) has also narrowed to very low levels and is threatening inversion as well.  Despite the fact that the bond market is signaling concerns, the equity market continues to march upward. Spurred on by the prospect of a trade deal with China and a dovish Fed, investors seem to believe that U.S. corporations will continue to deliver better than expected earnings.

We find the current environment puzzling.  While it is plausible that the current rally can continue a while longer, the underlying support for both the U.S. and global economies appears to be weakening and the prospects for another year of strong equity appreciation seems fanciful to us.  The bullish case is primarily driven by three basic arguments: trade war relief, a strong domestic economy, and a dovish central bank. While we agree that the market can and probably will rally upon any announcement of a significant trade deal with China, we believe that the effects of such a deal are not enough to justify continued significant equity appreciation.  While global trade is an important part of the U.S. economy, it is dwarfed by other factors. U.S. trade with China is only a fraction of U.S. GDP, and while corporate profits are impacted by the trade war, we believe that other issues like rising labor costs, the rising cost of debt refinancing, and weaker European demand are likely to outweigh the immediate effect of a trade deal.

Corporate profit margins seem to have rolled over, and regardless of the outcome of Chinese negotiations, corporate earnings continue to slow.  We believe it will be difficult for the market to support the current multiple in the face of rising costs and falling earnings let alone boost the multiple in any meaningful way, a requirement if stock prices are to experience a sustainable advance.

The U.S. economy has been and continues to be quite strong, but there are chinks in the armor.  Manufacturing has slowed significantly and may actually be at stall speed. Global commodity prices are falling, and the non-manufacturing base in the economy is slowing as well.  It is true that unemployment has remained very low, but CEO sentiment indicators suggest that corporate leaders’ expectations of the future are beginning to turn. These facts along with a struggling homebuilding sector, weak transports data, and a rising gold price all point to an economy that is fighting for growth.  Further, first quarter GDP was boosted by strong corporate profits and a significant inventory build. These tailwinds will not be present in the second quarter, leading to a lower GDP print which may negatively impact consumer sentiment and further threaten Personal Consumption Expenditures.

Finally the Fed’s recent dovish comments are not a harbinger of economic nirvana!  Rather the Fed is hinting at lowering rates because of the weak data coming out of Europe, the Far East, and our own domestic economy.  When stocks rally on the basis of weaker economic reports in hopes that the Fed will save the day, it is hardly a reassuring commentary on the state of U.S. markets and the current status of the domestic economy.

The Fed’s dual mandate is to ensure stable money and full employment.  In the face of relatively low inflation, an economy supposedly growing at greater than 3%, and an unemployment rate at 50 year lows, one would not expect the Fed to cut rates.  Rather, if the economy is as healthy as many believe the Fed should be raising rates as they indicated as recently as December of 2018. We believe the Fed understands the ramification of a global slowdown, the cracks in the current U.S. expansion, and slowing corporate profits and is doing its best to engineer a soft landing and avoid recession.  The question remains, will they be able to pull off this feat? Their track record is not particularly strong. At best one can argue that over the last 70 years they have engineered two soft landings, and the U.S. has experienced 11 recessions during that time period. You don’t have to be a sports junkie to realize that two for 11 isn’t the best record, and some economists would probably say we are being generous in our assessment.  So most of the time once the Fed begins lowering rates, we are already in a recession or it is too late to head one off. Unfortunately, here at Cornerstone we don’t believe this time will be any different and we continue to tilt our portfolios in a defensive direction in preparation for greater volatility and a possible move to the downside.