Capitalism works because it encourages and rewards those who successfully take risks, adapt to change, and develop profitable opportunities. 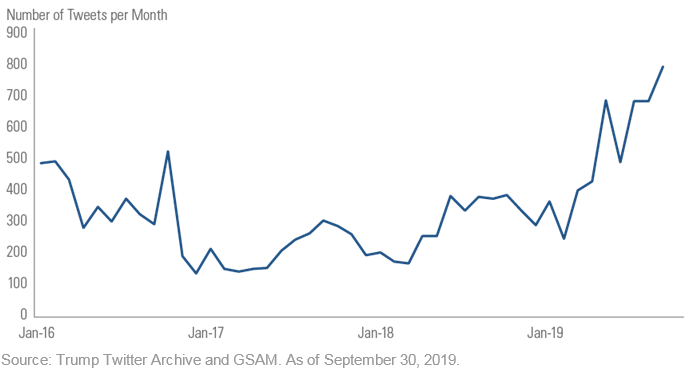 In many cases the trade war related tweets seem to move the market more than those related to the Fed or other issues like the impeachment inquiry. Throughout the quarter the President continued his running commentary on the trade war. At various times he expressed a more hardline position, sending the market into a downward spiral. At other times, he noted continued opportunity and progress which often resulted in a solid upward move by equity markets.

Trump also continued to express his opinion that rates in the U.S. are too high relative to rates in other developed economies, and that lower rates are an absolute necessity. We were pleased that he did note to the media that his methods of communication can be dramatic and are representative of the way he has always communicated. Therefore, if he refers to Jerome Powell (the current chairman of the U.S. Federal Reserve) as a bigger threat to the U.S. economy than Xi Jinping (the current lifetime leader of the People’s Republic of China), he’s utilizing hyperbole. We would have thought that most readers or listeners would have figured that out, but in these times, it appears that nothing can be taken for granted. Regardless, throughout the quarter the President regularly expressed his opinion on interest rates and the Fed’s activity or lack thereof. Ultimately, independent or not, the Fed lowered interest rates at its July meeting. The Fed noted that it viewed this cut as a mid- cycle adjustment to help ensure the continuation of the U.S. economic expansion in the face of a weakening global macro-economic outlook and the more accommodative stance taken by other central banks. Uncertainty surrounding the global slowdown, U.S. monetary policy, and the trade-war certainly led to additional market volatility. However, the Fed’s cut coupled with reasonable second quarter earnings and the belief that a recession is not immediately imminent allowed markets to hit new highs in July. Following the new highs, markets managed to remain within a few points of those highs throughout the remainder of the quarter. 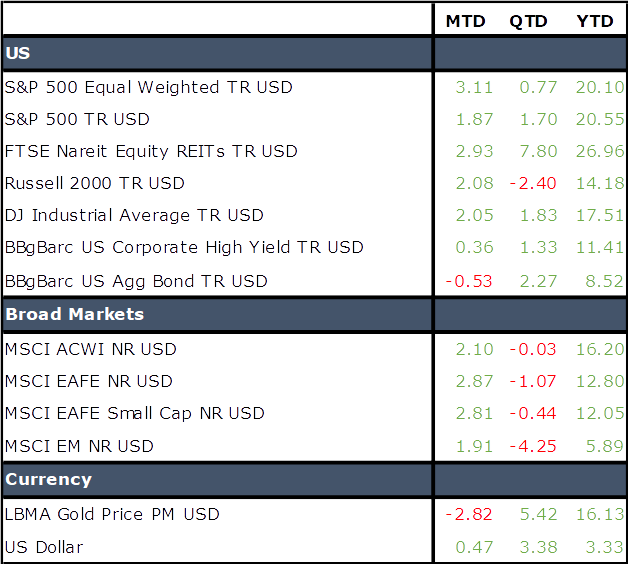 Despite a rocky period in late July and early August, large cap U.S. stocks continued their advance in the third quarter. Smaller capitalization companies began the quarter well, but gave up their gains and failed to recover despite the rate cut by the Fed. International equities also struggled during the quarter with the MSCI EAFE off more than 1% and emerging markets equities dropping over 4% during the quarter. The negative returns posted by international equities and smaller capitalization companies were tough on diversified portfolios as those declines largely offset gains in larger cap U.S. positions.

Falling interest rates did help REITs, and most Cornerstone portfolios benefited from exposure to the asset class. Declining rates also boosted bond returns during the quarter. The Barclays Aggregate Bond Index was up 2.3% for the quarter, eclipsing all major equity asset classes with the exception of REITs. Despite the Fed’s cut the dollar also rallied, ending the quarter nearly 3.5% higher and leading to negative dollar- based returns of foreign equities. 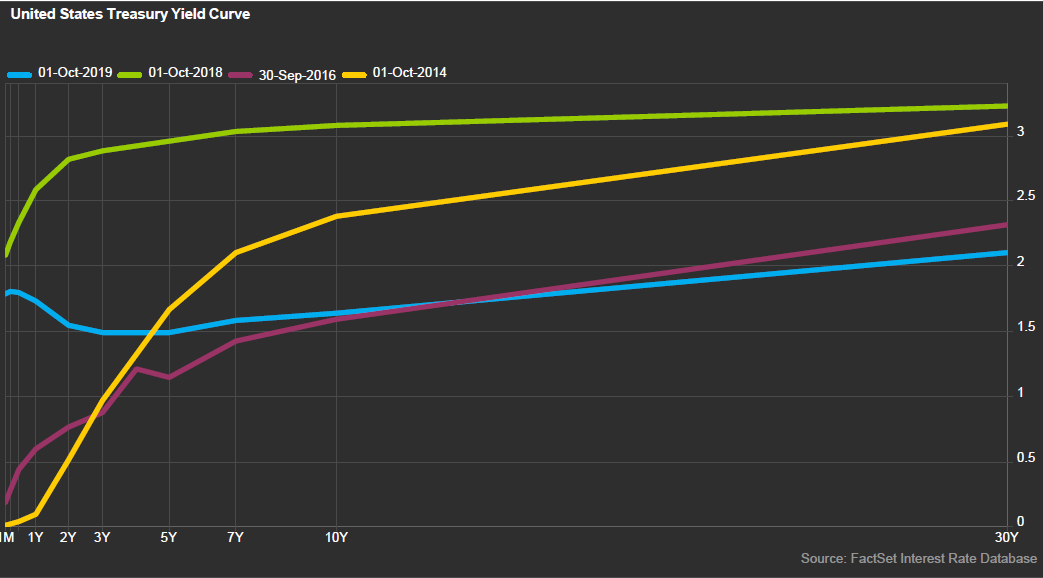 During the third quarter the yield curve experienced a classic 2-10 inversion: a period in which the yield on the two-year Treasury rises above the yield on the ten-year Treasury. Along with the broader inversion of the curve that still remains, this action on the part of the bond market was taken by many to be an additional sign that recessionary risk in the U.S. economy is rising. It is interesting to note that like most previous inversions we have experienced, the pundits were quick to remind us that an inversion does not always lead to a recession and there are plenty of reasons why this time might be different….the problem with that reasoning is that, in our experience, it rarely is!

The market did prove to be more resilient in the third quarter than we would have expected. 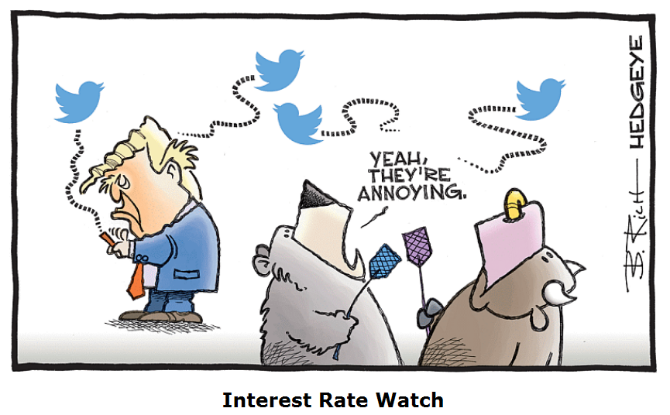 While a more accommodative Fed was helpful, we believe that rumors of additional Fed action coupled with the continued possibility of a deal with China are the primary drivers/supporters of U.S. equity markets. It seems that the market has chosen to hang its hopes on the fact that additional easing by the Fed and an eventual deal with China will allow the U.S. to escape recession and ultimately resume corporate profit growth. We find this view troubling, and we remain cautious in our outlook. Manufacturing continues to weaken and results from the third quarter show U.S. manufacturing slipping into contractionary territory. Economic uncertainty and the global slowdown have led to decreased business investment and CFO and CEO sentiment has grown more negative. Further, as we have pointed out before, the tight labor force acts as a double-edged sword, raising costs for corporations while at the same time continuing to ensure that the consumer remains healthy. Data released just after the end of the quarter indicates that the unemployment rate hit a 50-year low of 3.5%, leaving virtually no room for additional improvement and suggesting that corporations are struggling to find and retain qualified labor. Anecdotally, the strike by the UAW at General Motors highlights our point. Labor is emboldened, and the consumer is quite confident. Corporations are fighting rising labor costs in the face of questionable revenue growth. It remains to be seen if that will be enough to support this expansion over the next 12-24 months. Inadvertent or not, the Trump administration and the Fed are likely to be allies in the coming months as the Fed continues to ease monetary policy and the government seeks a “win-win” scenario to end the trade war. Coupled with a confident consumer, that is a tough combination to bet against.

However, Germany is on the cusp of if not already in recession as is Italy. The entire Euro Zone is slowing rapidly. Brexit remains on the horizon, and China is struggling to reignite its flagging economy in the midst of trade negotiations. Global uncertainty remains high, earnings growth continues to slow here in the U.S., and growth in the construction industry shows little sign of being the silver bullet in this drama. We are entering what has historically been the strongest quarter of the year for equity markets, but a significant amount of uncertainty remains. We intend to retain our more conservative positioning with a tilt toward value strategies and, in active portfolios, an overweight to defensive managers.