A good general [or trader] plans in two ways: for an absolute victory and for an absolute defeat. The one enables him to squeeze the last ounce of success out of a triumph; the other keeps a failure from turning into a catastrophe.

As the second quarter of 2020 comes to an end, market participants seem convinced that a V-shaped economic recovery is likely and that excessive equity valuations are not a concern. In past commentaries we have outlined our concerns about the significant gap between the tone on Wall Street and the economic realities found on Main Street. We find it is often easier to express concerns about the market than to sound optimistic. One sounds insightful, informed, and rational when laying out the case for a retracement of the recent rally and the potential for slower price appreciation over the coming months. However, equity markets go up approximately 70% of the time, and as a personal friend of mine commented a number of years ago, “Never be a bear; you won’t make any money.” So with those sentiments and with some level of trepidation, we will follow the advice of Mr. Brand and evaluate the plan for an absolute victory. 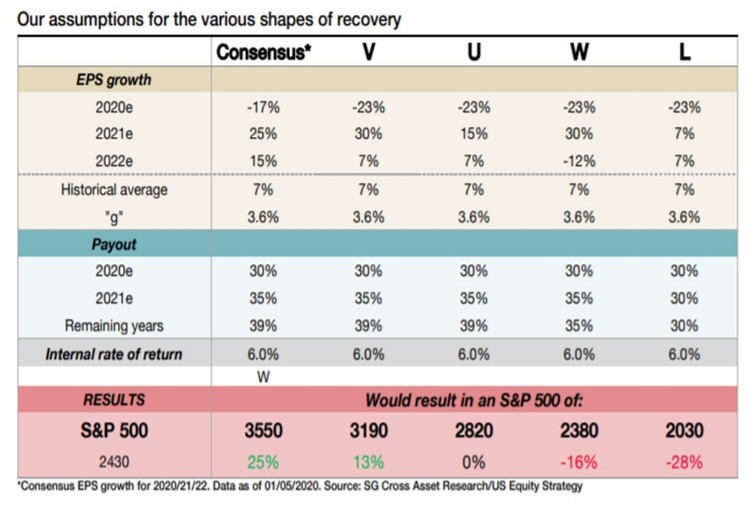 The foundation upon which a more bullish position can be constructed is varied, but we will focus on three primary arguments that we believe form the basis for an optimistic assessment of future market potential. These three foundation stones are the base upon which the current market rally has been built and upon which it will expand its gains over the next 12 months.

The first stone is the unprecedented fiscal and monetary stimulus put in place both here in the U.S. and in major economies around the world. 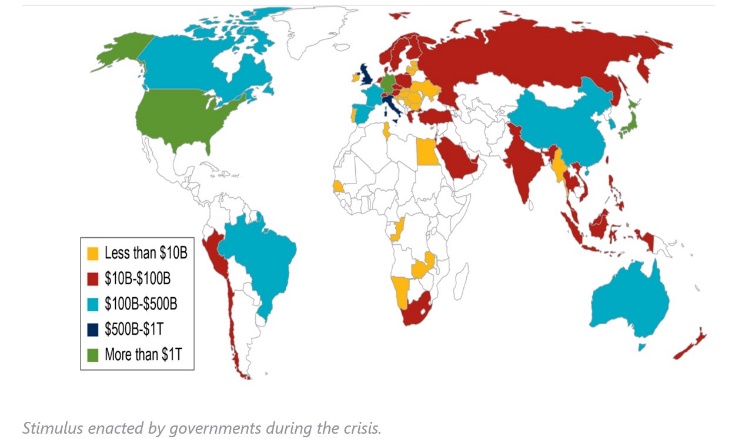 Governments and central banks around the world, faced with an unprecedented medical response to the global pandemic, have responded with extreme financial measures. Traditional measures like lowering interest rates and easing bank collateral requirements have been combined with much more aggressive measures. European and Japanese banks have, of course, violated the “zero bound,” offering negative rates and effectively paying depositors to hold funds. Virtually all central banks have engaged in some form of quantitative easing, purchasing securities to hold on their balance sheet. In the U.S., the Fed has extended these purchases to include, for the first time, not only investment-grade corporate bonds and exchange traded funds but also high-yield (junk) bonds. Its efforts to improve the liquidity and moderate the massive spread widening event that occurred in

You get an invitation to a party from the Fed, Treasury and Congress—they offer to pick you up, take you home and bring you breakfast in bed the next morning…You know it is going to be a party like no other.” – Bill Zox (Portfolio Manager Diamond Hill Capital Management)

March have largely been successful. Spreads have contracted, and corporations have taken advantage of the situation and issued massive amounts of new debt to help carry them through the economic crisis.

Additional funding for the Payroll Protection Plan has further boosted the impact of the fiscal stimulus, and it remains highly likely that more is coming. Speculation regarding the next round of stimulus suggests more aid is likely for states who often have balanced budget requirements. Additional direct support for individuals is also quite likely. To those concerned about the cost of this monetary and fiscal largess, we offer the following comfort: 1. Expansion of the Fed’s balance sheet represents debt to ourselves. 2. A demand shock is inherently deflationary, and with interest rates at all time lows the cost of debt is extremely cheap. 3. The potential short-term impact of doing nothing following the mandatory shuttering of the U.S. economy would likely be catastrophic, and as Keynes famously quipped, “In the long run we are all dead.”

The second rock upon which our foundation rests is the constraint, control, and ultimate mitigation of the risk to the population posed by COVID-19. While the recent surge of cases in the U.S. may pose some threat to this argument, the case can still be made that the world is winning the war against the virus.

While this graph may be a bit difficult to read, it demonstrates that most of the world’s infection rate is significantly below peak levels. By itself, this may not seem particularly significant, but economically it is very important. As the virus wanes, economies begin to re-open. The speed at which that re-opening can occur has a dramatic effect on the probability of a V-shaped economic recovery versus some other shape like a U, W, or heaven forbid the dreaded L-shaped recovery.

Despite the recent uptick in cases in the U.S., optimism remains high that the world has overcome the worst from the virus—at least from a GDP standpoint—and that the economic bounce will be relatively unhindered by the progression of the virus. The focus of this argument rests in the success of what we have referred to as the “governmental viral response initiative.” It includes but is not limited to social distancing, personal hygiene, wearing masks, limiting social gatherings, testing, contact tracing, enhanced drug related treatments, and ultimately a vaccine.

A complete review of the responses outlined above along with the search for a vaccine is beyond the scope of this commentary, but it is also likely unnecessary. It is our view that the average market participant and even those more well informed on the subject have little real understanding of the data and are not particularly familiar with concepts like herd immunity, anti-viral structure, and the likely acceptance by the FDA of an RNA vs DNA based vaccine candidate. In our view, the important components of this building block from the markets’ perspective are:
1. Vaccine research is being fast-tracked around the world and multiple alternatives are being funded and pursued. 2. Anti-viral treatments are already available and several have shown significant promise in reducing the death rate and improving the recovery period of sick patients. 3. Reopening of the economy can occur without a full vaccine, and other methods will be relatively successful in helping contain the virus until a vaccine is developed and herd immunity is reached. Finally, one could also argue that recent data supports a lower true infection mortality rate than was initially supposed.

The third and final rock upon which our foundation is built is a bit more nuanced. We will label it the “Valuation and Growth” element. A supposed negative of the recent rebound is related to valuation; however, more bullish commentators take a different view. While it is true that by most traditional metrics such as P/E, P/B, CAPE, etc. the market is overvalued, when considered relative to interest rates, current multiples look more reasonable. 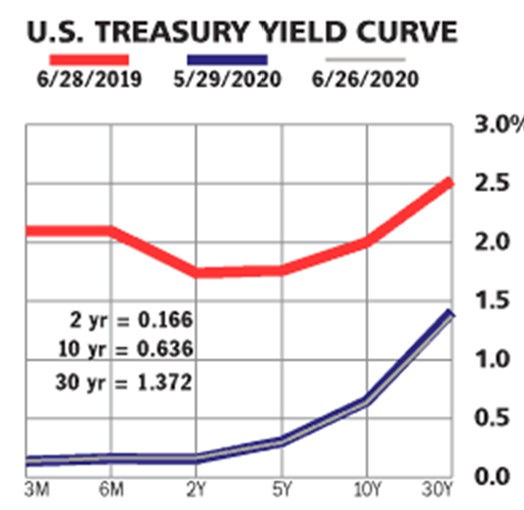 This is particularly true if one also takes the position that in the longer term the earnings stream of companies has not been significantly harmed. Rather what we have experienced is a short-term shock, and earnings will quickly return to previous levels and rise from that point. If that supposition is true and interest rates remain extremely low, then discounting that higher level of future earnings back to current values supports a higher current multiple.

On a related note, bulls would also argue that relative to other assets like bonds, equities are really the only game in town. Even at higher valuations the dividend yield on the market is significantly higher than that of long-term treasury bonds suggesting that yield starved investors have little alternative but to put their money into equities. This argument can be extrapolated to pension plans and other longer-term investors suggesting that demand alone may push equities higher. 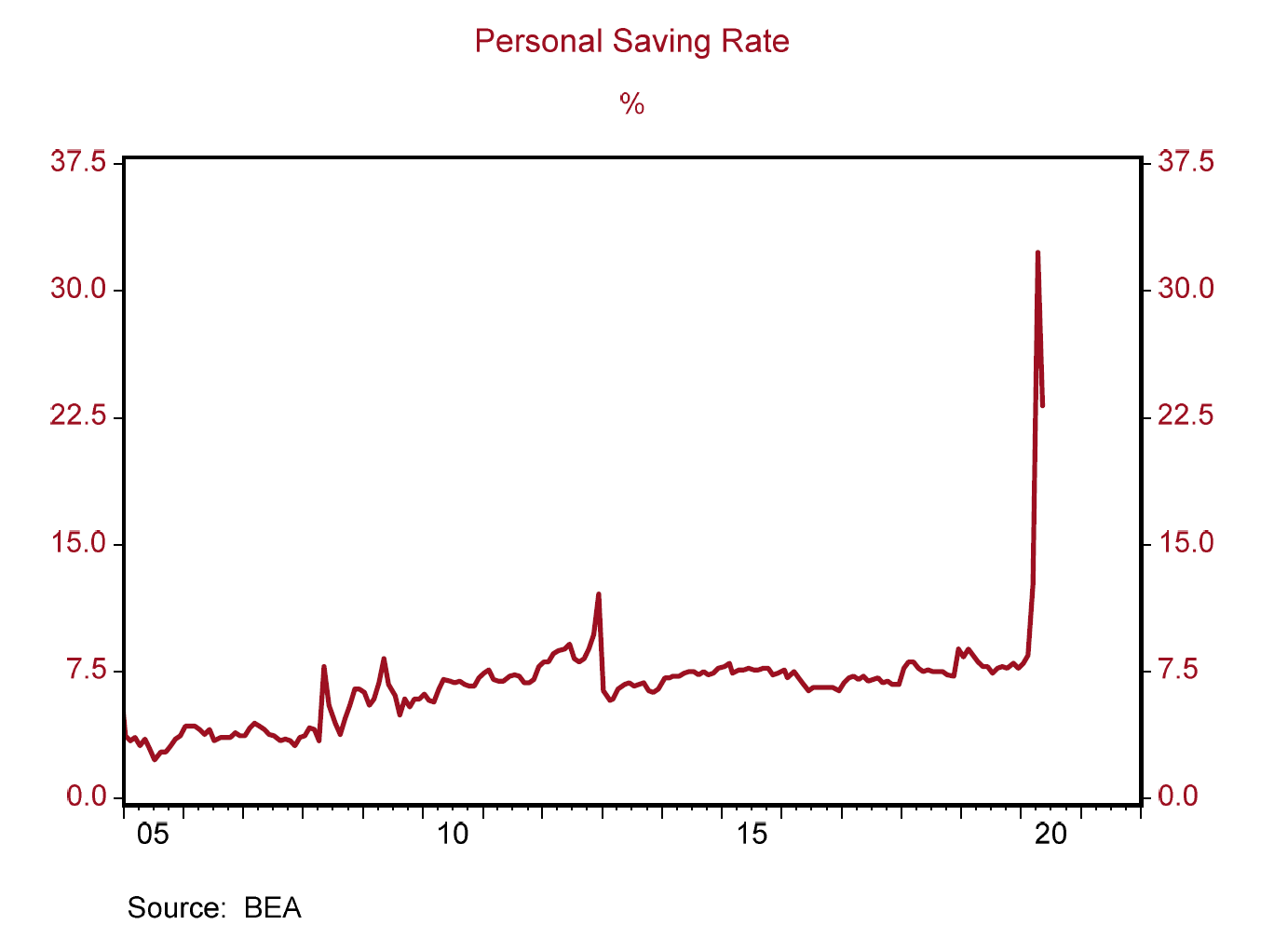 As we noted this argument is closely related to the quick return of economic growth and a strong rebound in the third and fourth quarters of 2020. Consequently, there is a great deal of interest in high frequency economic data, and it seems as though most investors have continued to view this data as relatively positive. 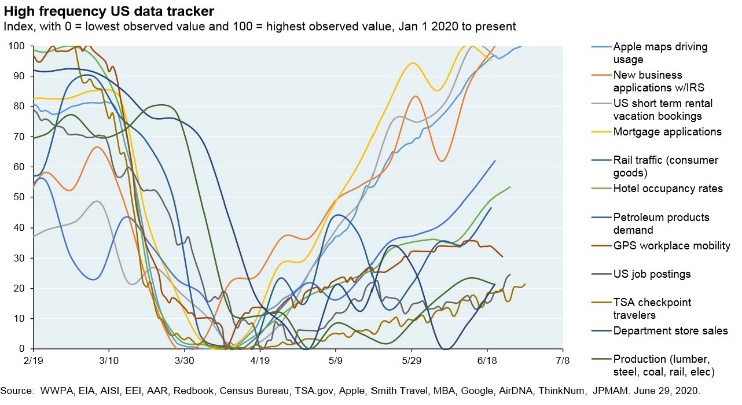 Although this chart, produced by JP Morgan, is certainly not exhaustive, it clearly provides a visual of the V-shaped recovery that investors are looking for. While some areas have not rebounded substantially, at this point they are moving higher and the expectation is that the trend will accelerate rather than level out. Unemployment, which is often a lagging indicator, has also surprised to the upside. The following graph shows both the bounce in payrolls and the corresponding drop in continuing unemployment claims. There is a long way to go, but in our view, the market has focused on the short-term improvement while discounting the challenges that may lie ahead. 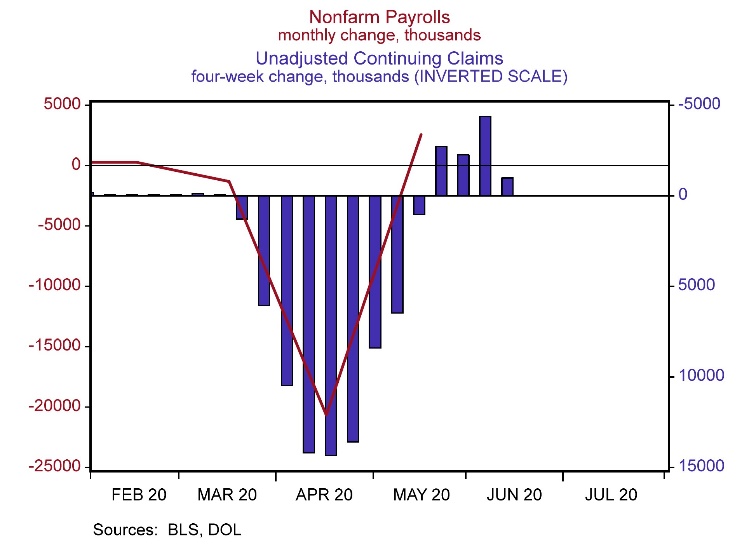 A great deal of economic data is backward- looking, and the market is a pricing instrument for the future. Consequently, the bullish case ties current short-term improvements in the economic data with low interest rates and arrives at the conclusion that equity markets may indeed have further to run, and that short-term negative volatility offers attractive buying opportunities. This “Valuation and Growth” stone is further supported by good, old-fashioned greed and the fear of missing out on a significant rally.

The pure bullish case may seem stretched to many of us, but as we noted in our quote at the beginning of this missive, we must consider both the bullish and bearish case and prepare accordingly. As we look toward the future, we see significant risk on the horizon. The bullish case we have outlined here is far from certain, and as we have noted previously there are numerous reasons to be cautious and to expect continued volatility. The father of value investing, Benjamin Graham, noted, “In the short run, the market is a voting machine, but in the long run, it is a weighing machine.” While we have articulated our view of the bullish case, we continue to believe that caution is advisable. The twin narratives of viral containment and economic impact have yet to fully play out. Markets often rally in the midst of difficult economic circumstances, and rarely are recoveries accomplished in a smooth linear fashion.

While it is certainly possible that the worst is behind us from both an economic and market perspective, a great deal of uncertainty remains. Not only are we dealing with the containment of a novel virus and the resulting economic fallout brought about as a result of the containment strategy, but we are also struggling with rising racial tension, contentious trade debate, and the possible loss by the incumbent party of both the Senate majority and the Presidency. Further, we are entering what has historically been the worst quarter of the year for equities. Optimism is an essential quality for any investor, but it should not come at the expense of reason or your portfolio!