You seldom get what you go after unless you know in advance what you want. Indecision has often given advantage to the other fellow because he did his thinking beforehand.

After experiencing a March many of us would rather forget, April was a welcome relief. During March, the viral curve was rising and countries all over the world were grappling with shelter-in-place rules, social distancing, and overwhelmed healthcare systems. April, on the other hand, saw the wave recede in some areas and seemingly peak in others. The worst-case scenarios, at least from a health care standpoint, seem to have been avoided. The market acknowledged this turn of events with an extremely strong rally which some have even dubbed a new bull market. We think terming this rally a new “bull market” may be a bit much, but regardless of your view the April rally was certainly a relief. Large cap U.S. stocks were up 25% from their lows of March 23rd. After lagging most of the month, small cap stocks came on strong in the last week, ultimately rallying 32% by the end of April.

REITs also experienced a 30% move off their March low.

While not quite as significant as their domestic counterparts, international and emerging market equities rallied as well. The MSCI EAFE was up 15% from its March low, and emerging markets were up 20%. Safe havens like gold and bonds rallied as well. The Fed’s aggressive monetary intervention led to stabilization in the bond market, and the Barclays aggregate bond index rose over 5% by the end of the month of April. Despite dollar strength, gold was up approximately 15% from its lows in March. The VIX, that classic fear gauge, dropped from record highs to more manageable levels. Taken all together, one would think the worst was behind us. Perhaps it is.

It is certainly true that equity markets are leading indicators and often rally long before other economic data points have reached their nadir. On the other hand, virtually all significant bear markets experience relief rallies throughout their duration. The current rally has been swift, making April 2020 the best performing April since 1987. There are certainly signs of strength that accompany this rally. The market has broadened, and while tech continues to dominate the performance of well-known indices like the S&P 500 and the Dow, smaller companies and REITs have also participated in this rally. However, many of the short-term technical indicators that were flashing “buy” in late March have already faded. The market was extremely oversold the fourth week of March, but now looks quite overbought. While technical indicators are useful for evaluating turning points and may provide short-term insight into markets and individual securities, longer-term investments must be fundamentally sound.

It can be fun to ride an individual stock up 50%, 75%, 100%. However, at some point reality sets in and a viable business model and future earnings must become a reality, or that same stock becomes a victim of its own success by plummeting to the depths from which it emerged. One need look no further than WeWork for a modern day example of such hubris.

It wasn’t supposed to be this way. WeWork was a unicorn, a near-invincible powerhouse flush with venture capital. The most brilliant minds in Silicon Valley and the most powerful global investors had shoveled billions of dollars into its coffers — how could it be anything but a sure bet? Validation from public-market investors was a mere formality.Dakin Campbell – Business Insider.com

As we see it, the challenge is that while the narrative surrounding global government’s viral containment measures has certainly improved, the future of the virus is by no means assured. In the U.S. the spread of the virus has slowed in some states, and the rate of deaths caused by the virus has declined. Further, it appears that the health system is unlikely to be overwhelmed, at least in the immediate term. However, a great deal of uncertainty remains. 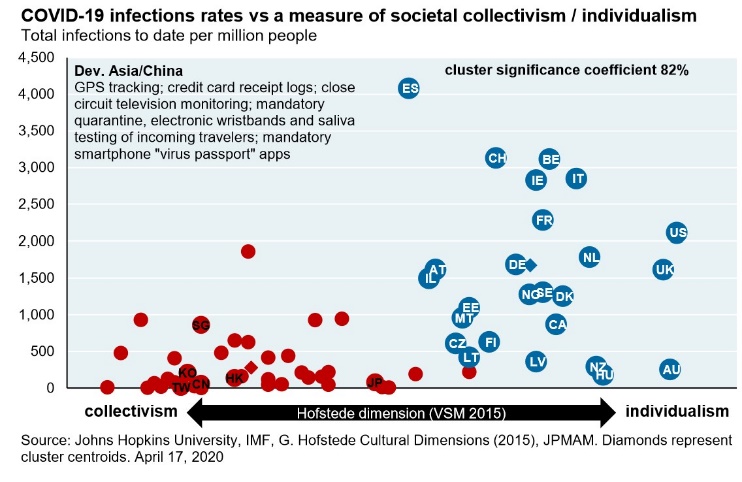 Additionally, a new paper issued by the Center for Infectious Disease Research and Policy provides some very interesting insights related to the future of the virus in this country and around the world. In our view, two key “take-aways” from the paper are: 1. “the length of the pandemic will likely be 18-24 months, as herd immunity gradually develops in the human population” and 2. “60% to 70% of the population may need to be immune to reach a critical threshold of herd immunity to halt the pandemic.” The point we wish to make is that regardless of one’s view point related to the current viral containment strategy, there is little likelihood that a consistent message regarding the future spread of the virus will develop anytime soon. Consequently, volatility surrounding the pandemic narrative is virtually inevitable.

While lack of clarity in the Covid-19 containment narrative is a significant challenge in terms of global health, it also presents an economic challenge. 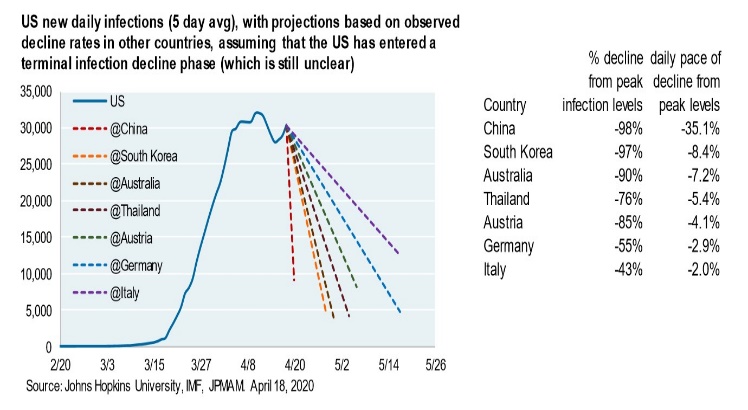 The economy is already experiencing the impact of three different shocks brought about by the spread and containment of the novel virus. First, an early supply shock, as China and eastern Asia dealt with the initial viral outbreak. Second, a demand shock as the virus spread and countries around the world initiated viral containment strategies. Third, an oil shock initially introduced by the price war between Saudi Arabia and Russia and accelerated by the previous two shocks and a lack of global storage capacity. While the oil shock may seem to be the least of the three, it is significant that as traders realized they had no place to store their oil and speculators rushed to exit their contracts, near dated May futures traded down to nearly -$40 just prior to contract maturity, an event which has not been seen in the history of U.S. futures markets. Volatility of this sort is unique, and current futures pricing reflects a significant challenge for U.S. shale producers. Despite the recent production cuts initiated by Russia and OPEC along with the natural market driven production cuts in U.S. shale, oil futures indicate a massive falloff in global demand over the next six months. Historically oil prices have been linked to global growth, and a massive fall in price in the face of significant supply cuts is worrisome.

Other high frequency economic data causes a concern as well. For example, the number of people moving through TSA screening at airports has consistently been approximately 5% of similar non-Covid periods of the past. Box office receipts are down basically 100%, Rail car traffic is down approximately 22%. Despite record revenue, Amazon’s earnings declined due to various additional costs required to deal with the virus, suggesting even companies which seem to benefit from the current environment may be negatively impacted by difficult to foresee knock on factors. Of course, jobless claims have reached levels not seen in 100 years, and consumers seem to have tempered their spending. Consumer confidence and CFO confidence appear to be falling and CFOs are concerned about the impact of Covid-19 on both their revenue and their bottom line. 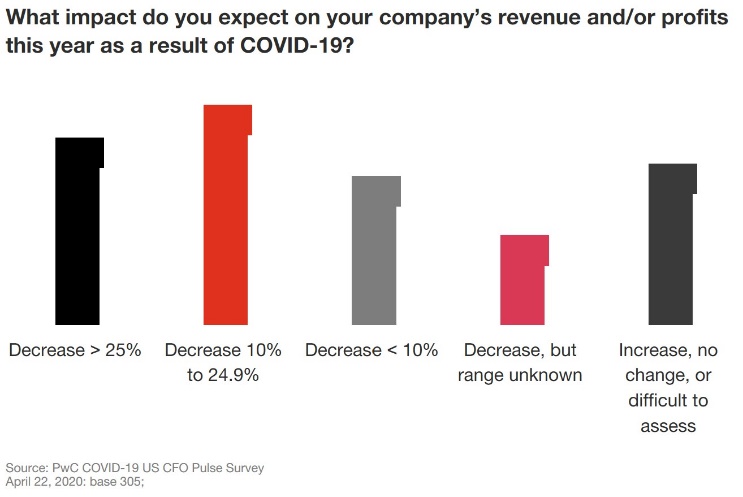 This stands in marked contrast to the AAII (American Association of Individual Investors) sentiment index. The AAII index bullish reading rose 5.7% last week and is not far below its long-term average. To us the data suggests that those with the purse strings are concerned, but investors may be experiencing a significant fear of missing out on this rally and have been jumping on board. That’s not a great sign! Usually, individual investors are the last to buy in and do so at relatively high levels. This view is further corroborated by other professional sentiment indicators suggesting caution is warranted.

It is certainly possible that the worst, at least from a securities market view, is behind us. However, from our standpoint visibility remains constrained, and there is a great deal of negative economic data that has yet to be fully digested. The future of the Covid-19 outbreak is less than clear, and it appears that the global response will continue to fragment. Also, markets do not like uncertainty! To us it seems as though uncertainty continues to be a significant theme as we enter this second month of the second quarter. 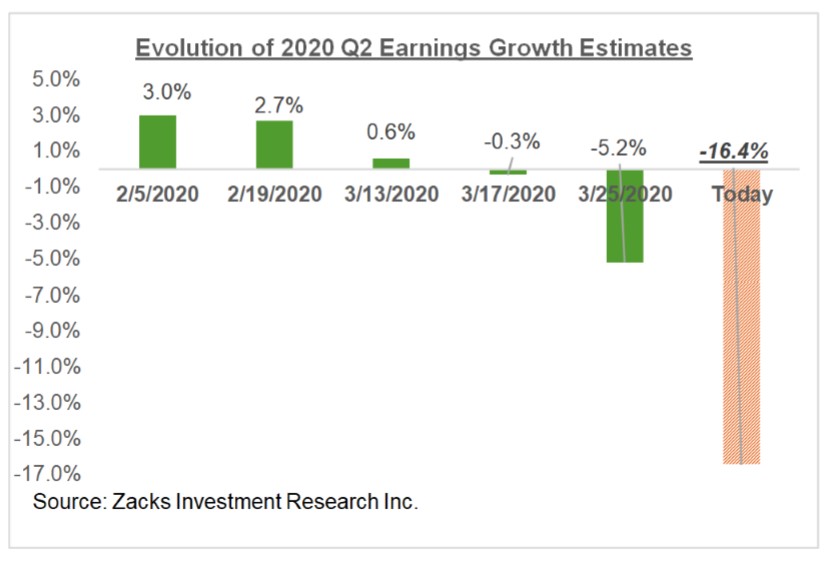 It is during challenging times like these that decision making and portfolio design are essential to the success of one’s investment program. If you are a short-term opportunistic trader, then the volatility surrounding the Covid-19 pandemic may provide you with multiple opportunities. However, if you are a long-term investor driven by company fundamentals, asset class correlations, and structural factors, then many of your decisions have already been made.

During times of opacity and volatility, looking for outlying contrarian opportunities that fit into your long-term investment program offers you the best opportunity for success. Further adhering to the system you chose under a rational review of the opportunity set will serve you much better than a reactionary response to the latest data point. Benjamin Graham, the father of modern value investing, noted, “Individuals who cannot master their emotions are ill-suited to profit from the investment process.” A harsh statement, perhaps, but one which time after time has proven to be true. Longer term, fundamental opportunities will present themselves in the midst of this difficult time, and your investment program should be flexible enough to take advantage of those situations.

Here at Cornerstone, our investment methodology capitalizes on such opportunities in multiple ways:

In our view strategic, planned action based on significant forethought is key to investment success. We believe that the current economic and market environment is likely to get worse before it gets better. In that vein, we will rely on our methodology to help us make solid decisions and provide protection in the event that the short-term events prove to be significantly different than expected.