“The death of contrarians has been greatly exaggerated. The reason is that the crowd is the market for most of any cycle. You cannot be contrarian all the time, otherwise you end up simply fighting the tape the whole way up (or down), therefore being wildly wrong.

The second quarter of 2020 started off with a bang and just kept going. Following the strong engagement by the Fed and the fiscal stimulus put in place by the government, markets began to rally at the end of the first quarter, and they never looked back. A crest in the first wave of COVID-19 infections and subsequent flattening of the curve was all it took to send markets skyrocketing back toward the February highs. While we were initially concerned about the change of narrative from “Viral Containment” to “Economic Impact,” the market largely shrugged off economic concerns along with the disparity between Wall Street and Main Street. Despite record unemployment numbers and a significant fall off in virtually every economic variable, stocks continued their advance. Led by tech heavyweights like Apple, Amazon, and Microsoft, the major indices posted their best quarterly gains since 1987. (Incidentally, the last time the DOW experienced a second quarter gain of this magnitude, the year was 1938!)

Large cap growth stocks continued to be the favorites for the year, but rallies in other more beaten down areas of the market proved stronger in the second quarter, a trend which allowed more diversified portfolios to gain back some of the ground they had lost in the first quarter. The out performance of growth continued with the Russell 2000 Growth up nearly 31% in the second quarter. Larger capitalization growth stocks were not far behind. The Russell 1000 Growth Index was up approximately 28% during the quarter. While growth strategies continued to dominate, value-oriented securities staged a strong rally as well. The Russell 2000 Value Index was up nearly 19% for the quarter, and the Russell 1000 Value Index was up approximately 14% over the same period. 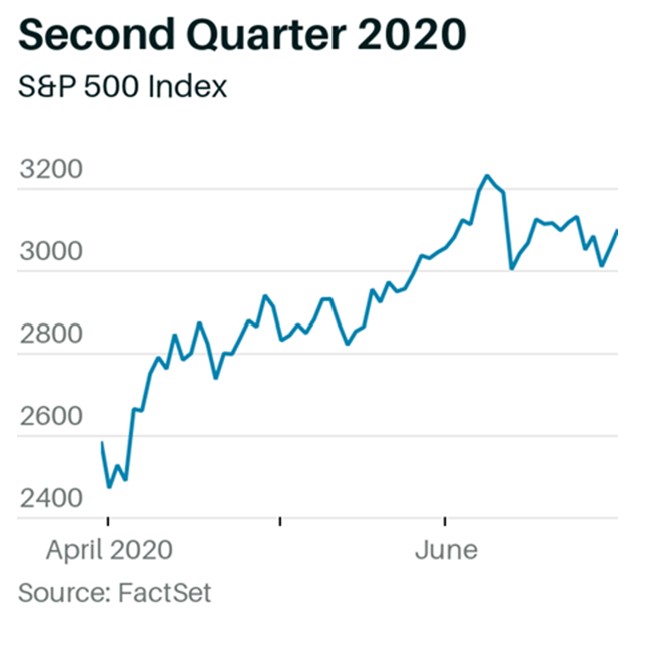 The Fed’s intervention in credit markets provided liquidity and resulted in spread tightening across the bond market. These moves resulted in a broad-based bond rally with the Barclays U.S. Aggregate Bond Index up nearly 3% for the quarter and over 6% on a year-to-date basis. Many active bond managers took advantage of the situation and capitalized on the spread disruption late in the first quarter. Met West and Agincourt, both managers heavily utilized across CMI portfolios, benefited from this trend and moved back ahead of their benchmarks during the second quarter.

High-yield bonds rallied along with equities as fears regarding a widespread rash of bankruptcies lessened. However, we should note that while these concerns have been temporarily addressed, the economic fallout of the viral containment strategy has yet to be fully felt, and it is likely that bankruptcies will rise later in the year. We have taken this opportunity to review our high-yield bond manager and to consider reweighting the sector in our portfolios. At this point we believe that spreads have tightened too much for such a trade to be particularly beneficial to our portfolios, but should spreads widen as a result of escalating bankruptcies later in the year, we would view such an event as a favorable entrance opportunity. 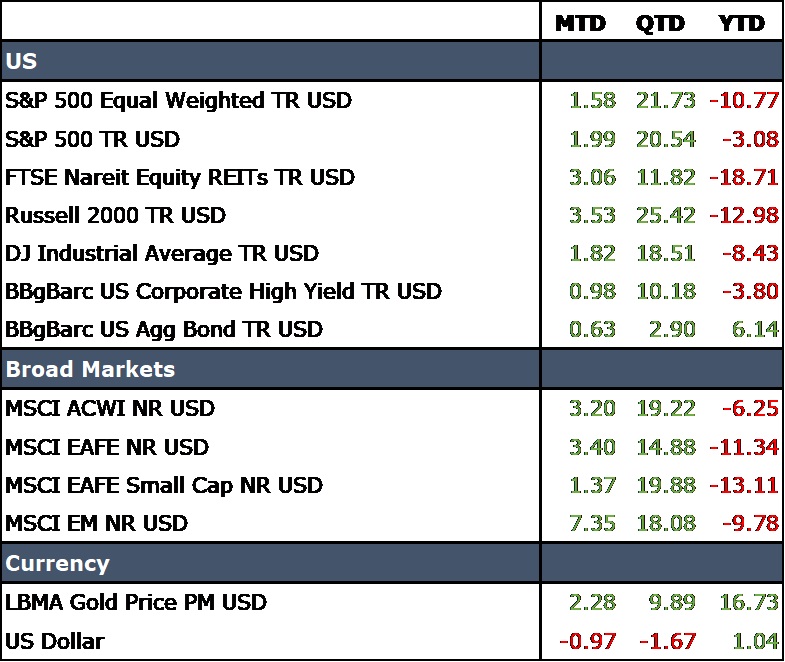 The dollar weakened slightly during the quarter which added a bit to the rally experienced by international and emerging markets equities. The MSCI EAFE, while unable to keep up with the rise in domestic equities, still managed a respectable 15% gain during the quarter. Emerging markets equities did even better, rising 18%, and international small cap led the way with a 20% increase during the second quarter. Despite the gains, equity valuations remain more attractive outside the U.S. However, a strong dollar and our concerns about volatility have led us to be cautious about moving additional assets into international assets at this juncture.

REITs are a unique case. Despite a strong rally of nearly 12% during the quarter, they remain down nearly 20% on a year-to-date basis. Yields are not overly attractive, and investors remain concerned about the viability of commercial real estate in the face of the coronavirus. Brick and mortar retail has been hit particularly hard, and fears continue to grow about a decline in the need for office space as more of the U.S. workforce transitions to a remote work environment. The longer the pandemic hangs on, the more likely it becomes that demand disruption gives way to more permanent demand destruction.

CMI portfolios fared relatively well during the first half of the year. The second quarter bounce was enhanced by our decision to partially reweight our large cap equity positions. We rebalanced a portion of our fixed income exposure back into equities at the tail end of the first quarter, and this fact coupled with our normal ad hoc rebalancing brought portfolios back in line with our long- term targets by quarter end. We continue to utilize our liquidity bucket to facilitate distributions, and we anticipate elevated volatility through the election in November. As previously noted, we continue to evaluate opportunities brought about by the unprecedented nature of this pandemic and the monetary and fiscal measures taken to counter it.

The diversified nature of our portfolios along with the tilt toward value has negatively impacted short-term portfolio returns relative to broader benchmarks like the MSCI ACWI and the S&P 500, but we remain committed to both the concept of diversification and the time-honored principle of “reversion to the mean.” Much like the late 90s, technology-related growth stocks have led the market for the last several years, and that trend has accelerated in the face of this pandemic. However, trees do not grow to the sky, and we continue to believe that valuations do matter. We believe that value will have its day. In the meantime, strong performance in our fixed income allocations along with our underweight to international equity continue to help our portfolios generate solid returns and dampen volatility.

As we head into the third quarter, uncertainty remains high. The coming presidential election, a resurgence in COVID-19 cases, and the pending “fiscal cliff” are enough to give the most stalwart investor heartburn. For the last two months we have focused on the growing divide between equity markets and Main Street economics. In our latest edition of The Palantir we highlighted three “foundation stones” upon which a bullish assessment of the market could be based. The first stone is the unprecedented fiscal and monetary stimulus put in place both here in the U.S. and in major economies around the world. The second stone upon which our foundation rests is the constraint, control, and ultimate mitigation of the risk to the population posed by COVID-19. 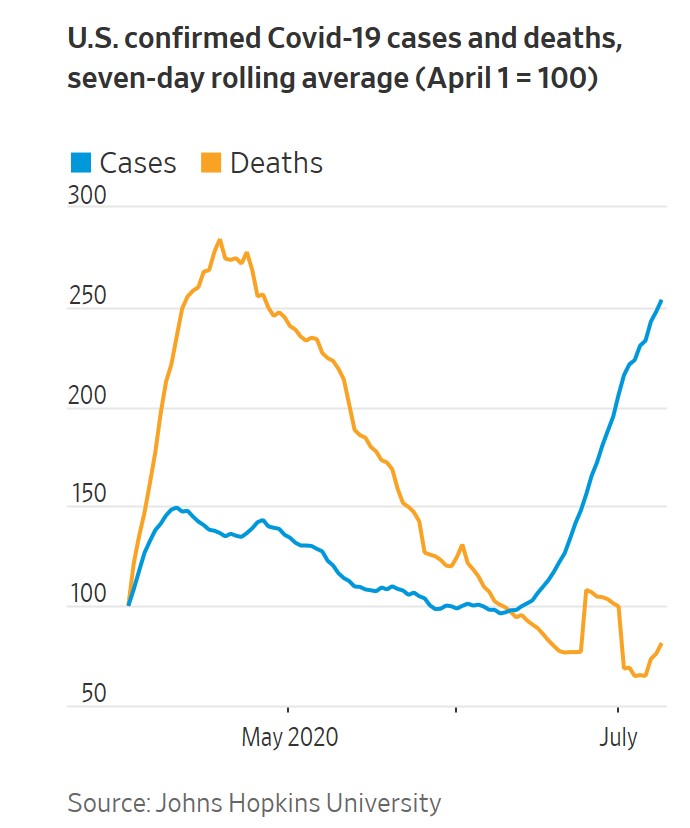 The third and final stone upon which our foundation is built is a bit more nuanced. We will label it the “Valuation and Growth” element, stating that traditional measures of value are not as helpful in the current environment due to the extremely low level of interest rates and the possibility of a quick resurgence in demand. As we noted, the case for being bullish is a bit tougher for us to make! We are contrarians by nature and relate more easily to a value-based argument. However, as our opening quote from Barry Ritholtz suggests, it doesn’t always pay to fight the tape. More recent economic data has been mixed but often more positive than expected. While one could argue that the surge in COVID-19 cases is problematic, recent data from the CDC suggests that the infection fatality rate (IFR) remains quite low. At the moment, one can paint a more bullish or bearish picture relatively easily. We suspect that a full economic reckoning is still to come as fiscal stimulus wanes and more Americans find they may not have a job to return to. Regardless, we are not short-term investors. We and our clients are not just in the market for the next few weeks or months. As John Kenneth Galbraith quipped, “The only function of economic forecasting is to make astrology look respectable.” As investors we must deal with uncertainty and fear. In the short term, virtually anything can happen. Currently, we lean toward a more middle-of-the-road outcome. We believe that a true “V” shaped recovery is unlikely, but a truly negative depression-like scenario remains unlikely in our view as well. Consequently, we will continue to exercise caution while remaining positive about the long-term future of equity markets and the U.S. economy.