Well, 2017 is in the history books. In many ways it was a banner year, and yet due to declining volatility throughout the year there was little market drama of note. Rather, the market simply marched higher and higher throughout the year with nary a 3% decline to be found. The S&P 500 moved up or down more than 1% on a trading day less than ten times in 2017, which is a feat rarely seen in U.S. market history. This “melt-up” in equities has been quietly sustained and is now the second longest bull market in U.S. history. 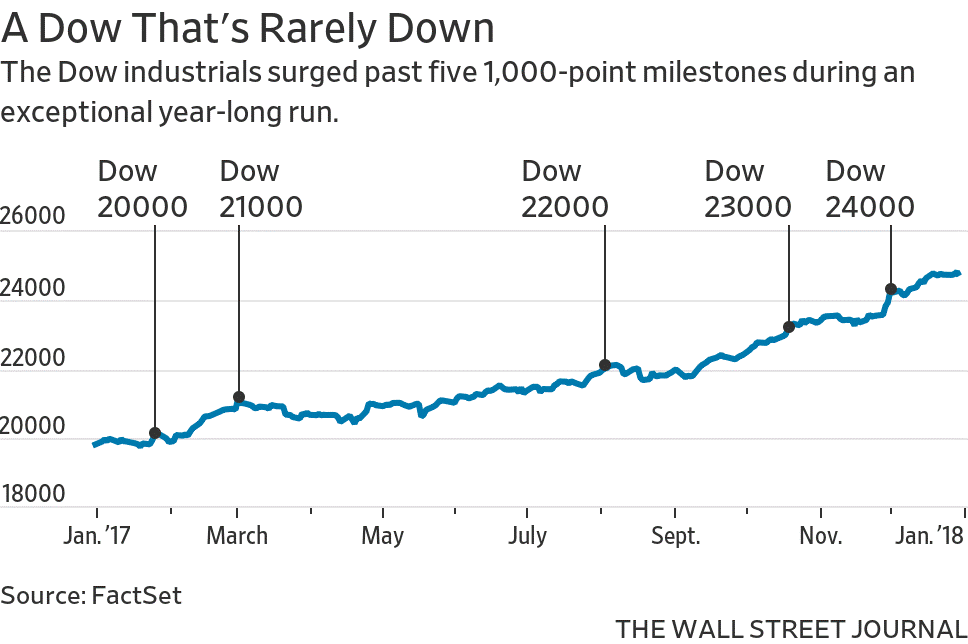 All tweeting aside Mr. Trump has managed to preside over a late cycle market rally that would be the envy of many a U.S. President. At the moment the rally shows no signs of abating and while valuations are indeed high, many trend-related indicators remain positive. This environment suggests the current move may continue a bit longer before the market takes a breather. We should note that a “breather” does not necessarily mean a bear market. Bear markets have traditionally been defined as a decline of greater than 20% from peak to trough. Such declines are usually accompanied by a recession. Current conventional wisdom, along with virtually every economist we know, suggests that a U.S. recession is far from imminent. Smaller market “corrections” occur more frequently and are generally healthy events flushing speculators out of the market while at the same time testing and confirming valuation levels. Corrections can occur virtually any time, and given the market’s unprecedented recent run, it would seem we may be a bit overdue for such an event.

Regardless, the market ended 2017 on a high note and continues to march upward as of this writing. Tech was the place to be in 2017, and the NASDAQ 100 was the best performing broad U.S. index (up over 34% for the year). Growth trumped value for both the quarter and for the year, and despite a strong comeback in the latter part of the year, Large Cap stocks solidly outperformed their Smaller Cap brethren. For the first time in several years Developed Market International equities outperformed U.S. Equities. The MSCI EAFE ended the year up over 25% and Emerging Market equities were up over 37% in dollar terms. In short, it was a positive year for virtually all equity holders.

Bonds, while not dramatic performers, also managed a positive year. The Barclays Aggregate Bond Index was up just over 3.5% for the year. Surprisingly, longer dated bonds actually did quite well as the long end of the yield curve actually drifted lower throughout the year. The U.S. Federal Reserve raised rates three times in 2017, pushing the shorter end of the curve up throughout the year. On a cautionary note, the yield curve flattened significantly during 2017. Historically, an inverted yield curve (in which shorter term rates exceed longer term rates) has been one of the best predictors of a coming recession. It will be interesting to see how the curve moves in 2018. The Fed’s current tightening takes two forms: continued Fed Funds rate hikes and the continued “run-off” of the Fed’s balance sheet. The first pushes up the short end of the curve. The second should exert upward pressure on the long end of the curve, causing the overall curve to shift upward. However, it remains to be seen if broader deflationary pressures coupled with stronger than expected demand for safe yield may exert sufficient downward pressure on the long end of the curve to offset the Fed’s balance sheet liquidation plan ultimately leading to an inversion. While we believe that such an inversion is likely to occur, it will likely take some time to develop. 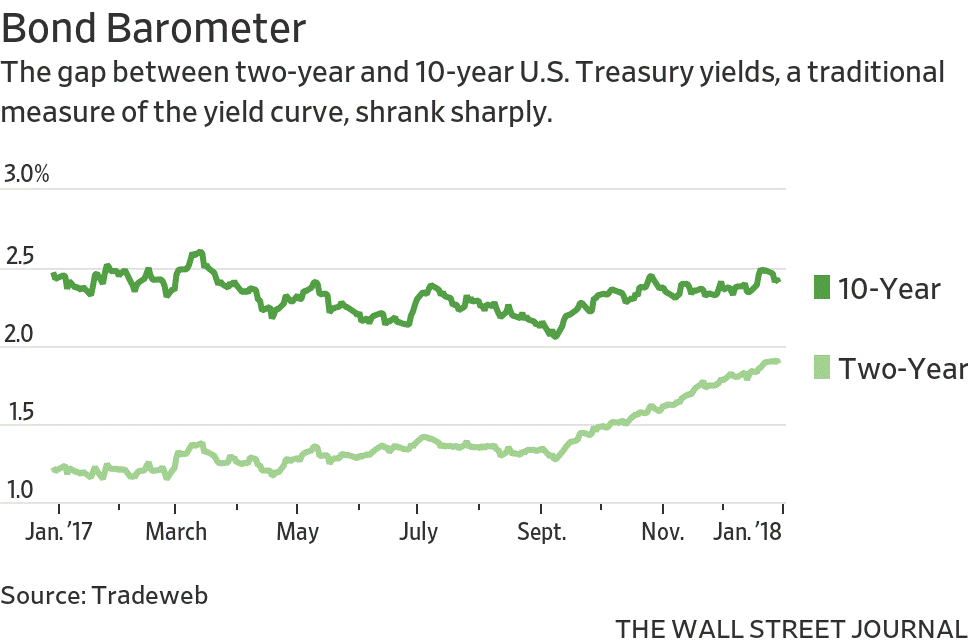 The U.S. Economy improved significantly throughout 2017. Unemployment ended 2017 at a 17 year low of 4.1%, and the participation rate improved as well. Wage growth improved throughout the year and while productivity was less than stellar, it has begun to improve more recently. Corporate profits were up. The U.S. Manufacturing index was up strongly at the end of the year and coupled with strong employment growth suggests a relatively healthy and growing U.S. economy. In fact, virtually all economic statistics improved during 2017 and ended the year at or near their highs for the entire economic cycle. Consequently, it is difficult to say this expansion is at an end. 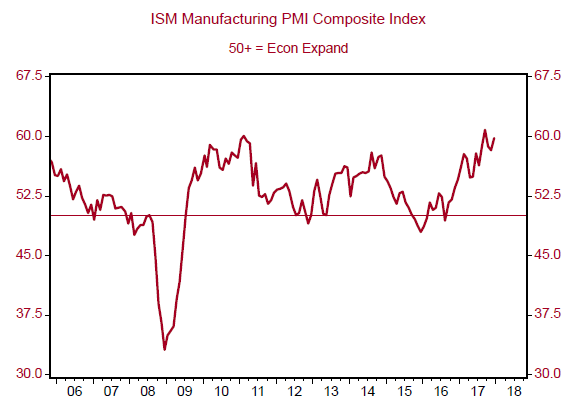 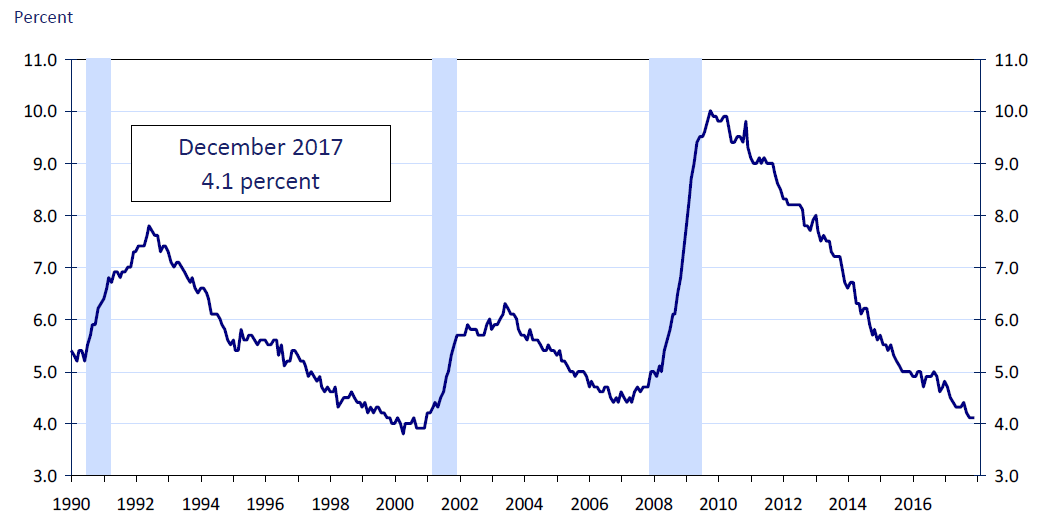 Of course, the capstone of 2017 was the tax reform act passed late in the fourth quarter. Trump finally managed to make good on one of his primary campaign promises, and the new tax law was the most sweeping change to the U.S. Tax Code since Ronald Reagan was in office. While we believe the changes to the code will help the average consumer they are, in our view, not particularly significant at the individual level. Perhaps the most significant element is the number of filers who will now be claiming the standard deduction rather than itemizing. This should streamline tax preparation and make the job of the IRS easier. We should also note that we believe the rhetoric surrounding this bill suggesting that it only helps the upper class is flawed. In our view the middle class will definitely benefit from this bill, and it is actually the upper middle class living in states with a high state income tax that will be most negatively impacted. We find it interesting that two of those states (New York and California) have high concentrations of voters who are not particularly fond of Mr. Trump or the Republicans in general, but we digress. We believe the most important element of the bill is the corporate tax cut. It is significant and will improve the U.S. competitive position globally. Further it is quite likely that the cut will lead to some additional capex spending on the part of companies. Ultimately a lower corporate tax rate makes the U.S. more competitive, and while economists may quibble over how corporations spend the money, we believe this move will help boost both the U.S. economy and enhance corporate earnings. It is true that much of the benefit of the cut is likely already priced into the market, but when coupled with the healthy state of the U.S. and global economy, we believe the tax reform act should help support both the economic expansion and the stock market.

In summary the fourth quarter was a fitting end to a year that took us by surprise. The market exceeded our expectations, and despite excessive valuations turned in fantastic performance. Earnings improved, the U.S. economy improved, and the global economy is experiencing a synchronized recovery for the first time in over 17 years. Monetary policy is certainly tightening, but fiscal policy and economic growth coupled with low levels of inflation suggest that this expansion has room to run. While it is unlikely that we can make it through 2018 without some sort of correction, we believe that the market is likely to move higher throughout the year and that the global expansion will continue. As we noted previously, we have positioned our portfolios with additional international exposure to take advantage of a falling dollar and the relative valuation advantage offered by overseas equities. We remain relatively defensive in our fixed income portfolios because we see little advantage in reaching for return in this area of the market. In short, we see 2018 as an opportunity to practice persistence…as Calvin Coolidge said: “Press on. Nothing in the world can take the place of persistence. Talent will not: nothing is more common than unrewarded talent. Education alone will not: the world is full of educated failures. Persistence alone is omnipotent.” We wish you all the best in 2018.

We hope you enjoyed our 4Q 2017 Market Commentary: stay up to date with all of our market commentary.