The first quarter of 2018 certainly proved to be significantly more dramatic than 2017! Following a very strong January, the market tanked in February, down 10% descending rapidly into correction territory. However, despite global trade concerns, markets managed to stage a comeback in March, ultimately ending the quarter just below break-even.

With the exception of REITs most equities finished the quarter down slightly. Perhaps more surprising for many investors was the performance of bonds during the quarter. Inflationary concerns stoked fears of rising rates, and the venerable Barclays Aggregated Index ended the quarter down nearly 1.5%. The first quarter of 2018 proved to be one of those rare times when more conservative portfolios generally declined as much as or in many cases more than their more aggressive counterparts. Diversification was of little help during this period. Diversified portfolios provided insulation against the absolute level of volatility during the quarter, but when the dust settled at the end of the quarter most diversified portfolios declined 1-2% along with broader indexes. As expected, active management provided some protection against the first quarter volatility with many active managers finally benefiting from the risk control measures in their selection strategies. The first quarter of 2018 was not for the faint of heart; when volatility finally returned to the market, it did so with a vengeance leaving few places for investors to hide. However, when the quarter ended little damage had been done, and most investors will find themselves starting the second quarter about where they ended 2017. 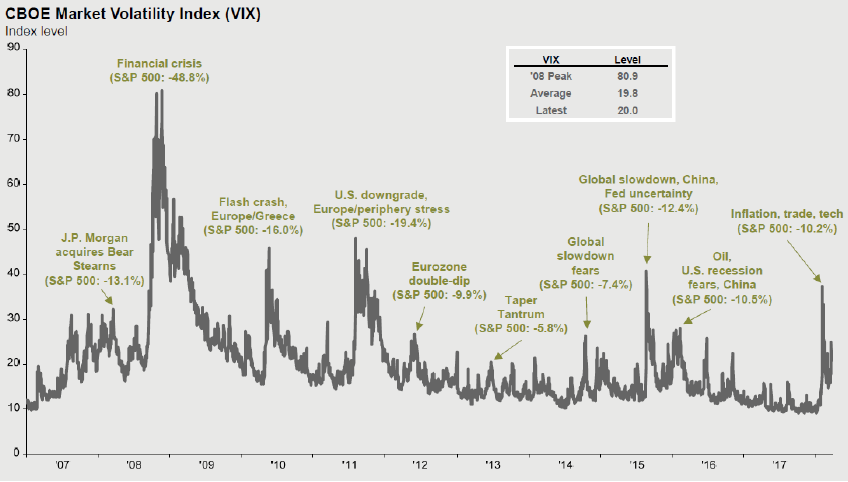 Despite investor fears we do not believe that this recent bout of volatility is a harbinger of a bear market. We have no doubt that the bear will eventually visit, but we do not believe the current environment is the sort that usually accompanies a true “bear.” Bear markets are normally defined as a decline in excess of 20% in a major index like the S&P 500, the Dow Jones Industrial Average, the MSCI EAFE, etc. Significant moves of this sort are rarely found unaccompanied by a recession. There are exceptions, of course; 1987 comes to mind, but given the current strength of the U.S. economy along with the recent fiscal stimulus provided by the tax cut, we think a true bear market remains rather unlikely. In fact, throughout most of the first quarter, macro-economic data points remained at healthy levels. Certainly one can make the case that the environment is weakening…we are in the late stages of an expansion, after all, but we don’t believe a recession is imminent.

The question foremost in our minds at the moment relates to the Fed. It is difficult to argue that inflationary pressure is not growing. The U.S. is at full employment and the government just passed a tax cut. Under the circumstances, we believe the Fed is behind the curve not ahead of it. Consequently, the Fed, in our view, will continue raising rates. We put ourselves squarely in the camp expecting three additional rate hikes to accompany the move they made at their March meeting. Assuming those moves are approximately 25BPS each, then we will find ourselves with a Fed Funds rate between 2.25 and 2.5% at the end of the year. While this is far from a punitive rate, we believe that it may prove more painful than would normally be expected. Corporations and individuals have become used to extremely low levels of interest. We might note that a 2.5% move in interest rates would be akin to a move from 1.5% in a normal recession back to a “normalized” level of 4%. While one can make the argument that monetary policy remains relatively accommodative, at some point these moves, particularly when coupled with a gradual decline in the Fed’s balance sheet, will begin to bite. The market has been priced for perfection and, consequently, the interaction by the Fed, geo-political uncertainty, and unique events (Facebook data breach) all suggest more volatility to come.

On a more positive note, first quarter earnings are expected to be robust. Given the post January market contraction and higher expected earnings, the forward multiple on the market has actually declined during the first quarter of 2018. While far from signaling an “all clear,” this does take some of the pressure off the market and suggests that if earnings do rise to meet analysts’ revised expectations, the market may move back toward its January highs. On a technical basis the market has generally rallied off its 200-day moving average suggesting that the long-term trend upward remains intact. Volatility is growing and cracks are beginning to show in both this long running economic expansion and the accompanying bull market, but we believe we still have a couple of innings left to play.