Volatility continued to be a significant factor in the second quarter of 2018. Surprisingly, REIT’s rallied strongly and along with small cap domestic stocks led the way as we reached the half-way mark of 2018. The rally in REIT’s is of particular note because of the continued upward trend in interest rates and may reflect the surprising strength of the broader U.S. economy in the 2nd quarter along with the resilience of the U.S. consumer. 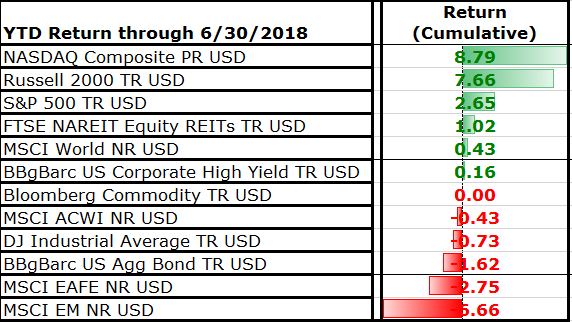 Large cap stocks, led by the Russell 1000 Growth Index, also staged a comeback in the 2nd quarter with the S&P 500 index ending in the black and the venerable Dow Jones Industrial Index still underwater down nearly 1% on a year-to-date basis. A rally in the dollar led to disappointing international equity returns. The MSCI EAFE was down again in the second quarter, but the real surprise was emerging markets which reversed course and ended the first half of the year down over 6.5%. Once again our unwillingness to fully match the “international weighting component” of the global equity basket represented by the MSCI ACWI (Morgan Stanley Capital International All Country World Index) served clients well, and our incorporation of international small cap exposure provided a slight advantage over a corresponding weight to the international developed market large cap asset class. 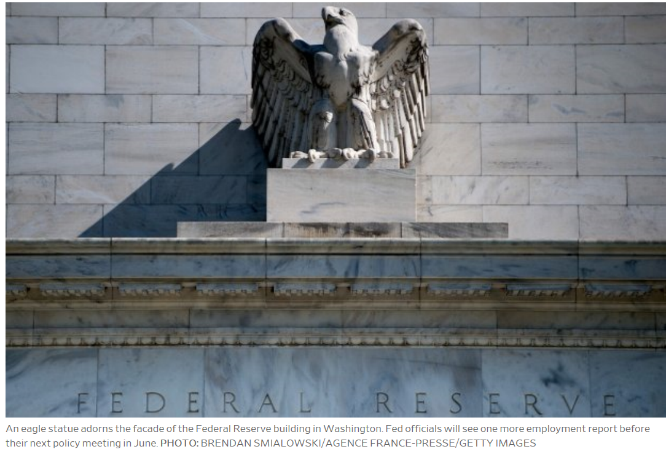 The FED continued to be a driving force in the 2nd quarter with the U.S. central bank raising interest rates another quarter point to a range of 1.75-2.0%, and signaling that they expect two more hikes in 2018. Interest rate moves pressured bonds, and the Barclays Aggregate Bond Index remained in negative territory down 1.62% on a year-to-date basis. 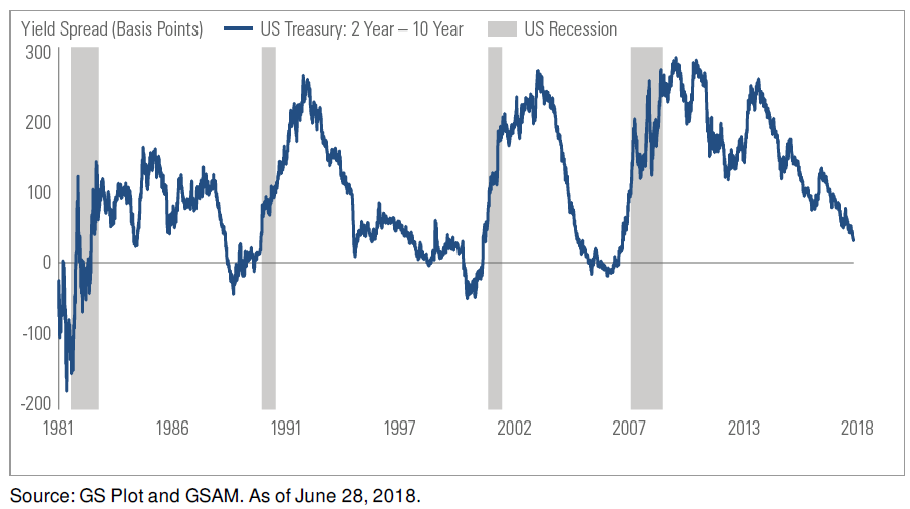 The yield curve flattened further during the second quarter, but despite concerns of a coming inversion, markets remained relatively sanguine and the U.S. economy continued to strengthen. 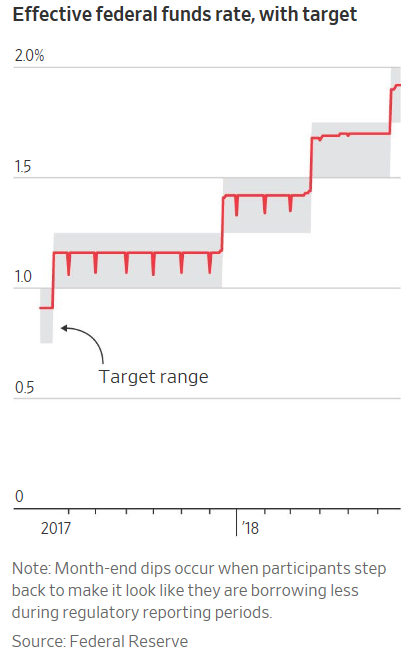 A rising FED funds rate coupled with softer rhetoric and action on the part of other prominent central banks led to a rise in the dollar. As always concern regarding the level of dollar denominated debt on the part of emerging economies along with economic concerns led to significant currency pressure and weak EM equity and fixed income returns during the second quarter. The ECB (European Central Bank) met in June and indicated that it will continue quantitative easing throughout the remainder of the year and that interest rate levels are unlikely to change through mid-2019. Although European economies may be a year and a half or more behind the U.S. in the current expansion, interest rate differentials may limit or even curtail the decline in the dollar which began in 2017. While it has been our contention that the dollar trend changed in early 2017 and that currency trends generally persist for a period of five to seven years, the continued easy money policies being pursued by the ECB and the Japanese Central Bank have clearly impacted the dollar’s decline. Further, recent economic data coming out of the Euro Zone is not particularly strong when compared to the U.S. economy. While it remains likely that European monetary policy will begin to tighten about the time the U.S. economy is peaking or perhaps has already rolled over, an immediate resumption in the dollar’s decline seems unlikely. Consequently, we believe that our current allocation to International and Emerging Markets is adequate. 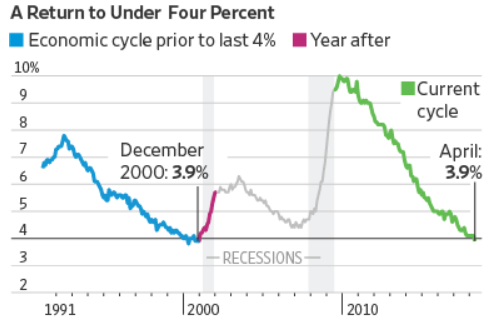 As previously mentioned, economic data in the second quarter continued to improve. Unemployment hit a low for this cycle during the quarter, and other economic variables continued to improve. With the continued short-term decline in the trade deficit, GDP math points to a very high “print” in the 2nd quarter. Although the Atlanta FED’s GDP Now forecast has declined in recent days, it still suggests that GDP in the 2nd quarter of 2018 may approach 4%. In short, the U.S. economy continues to fire on all cylinders and the likelihood of a recession occurring in the second half of the year remains remote. Corporate profit margins have improved and corporate earnings for the 2nd quarter are expected to be quite strong. Consequently, the valuation of the U.S. equity market improved slightly during the second quarter of 2018. However, despite all of the good news, we remain somewhat wary. Markets have narrowed and a relatively small number of tech stocks continue to drive broader market returns. The transportation index has not returned to its 2018 highs, and other economically sensitive sectors of the market like homebuilders have also not rebounded as one might expect were the equity market as healthy as we might like. Further, the growing rhetoric surrounding the “Trade War,” along with growing inflationary and pricing pressure, suggest that caution is warranted. Afterall, the broader market is not far off the all time highs set in January. We expect that equity and bond market volatility will remain prevalent during the second half of the year. This expectation along with rising U.S. interest rates has led to continued proactive action in our portfolios. During the second quarter we elminated our hedge position in long-term U.S. Treasuries and placed the position with an Ultra Short Treasury alternative. Given the flattening yield curve and signals from the Federal Reserve regarding the trajectory of future short-term interest rates, we believe that a reduction in both duration and spread risk across our fixed income positions is warranted. Further, the sharp rise in the short end of the curve has made “Cash Plus” alternatives quite attractive. We continue to reposition our overall fixed income positions to take advantage of these trends and to help ensure protection in the event of a sudden equity market down turn. 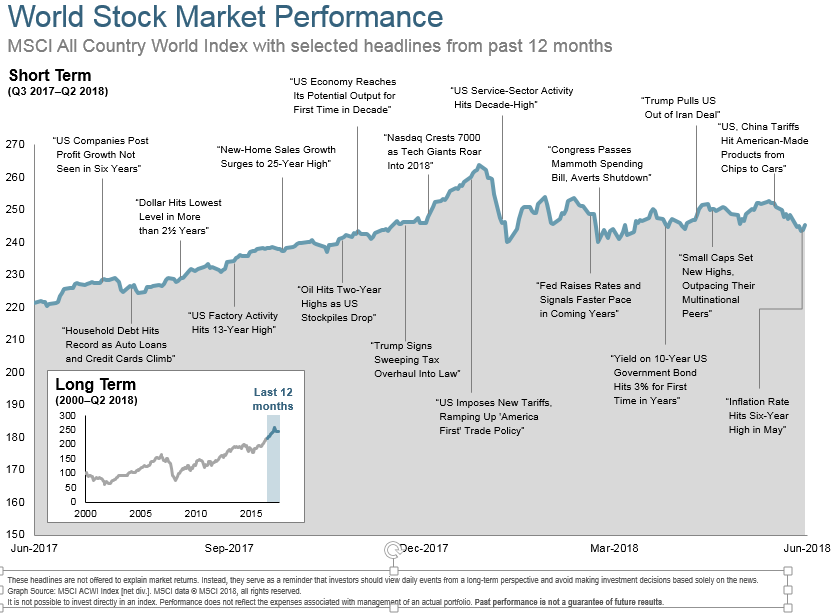