Please pardon the longer quote by Dickens. In the present moment it seems that the deeper parallels of both the quote and the novel itself are quite stark. A quarter that began with such promise ended in grim fashion, drawing our attention from the strength of the economy to the frailty of human life. The fear of loss, loss of life, loss of fame, loss of fortune, and the juxtaposition of greed in the midst of chaos is prevalent at any time, but more so in the midst of a crisis like the one we are now experiencing. One need look no further than the Wall Street Journal to find both the call to a new “socialism” and a scathing rebuke for those who would profit off the illicit sale of personal protective equipment (PPE). The “best of times” were in evidence at the outset of the quarter as the U.S. ratified the USMCA trade deal and a new unilateral phase one trade agreement with China. The Fed continued to signal its support of the economy, the unemployment rate plumbed new lows, and the market advanced to new highs on the strength of monetary support and declining global trade tensions. Meanwhile lurking just across the metaphorical channel, COVID-19 laid waste to the Chinese economy and shortly thereafter advanced upon our own shores. With the rise of the virus, we exchanged the “best of times” for “the worst of times,” and global equity markets were among the casualties. While hardly an expert on the French Revolution, we are students of history. The chaos, fear, and finger pointing of that time period, to say nothing of the death of innocents both rich and poor, is eerily reminiscent of our present day. The English were lucky that the perils of the French Revolution did not immediately spread across the channel in the manner expected. Instead, from the ruins of failed aristocracy rose an emperor whose wars brought challenges to the English coast that could not have been imagined a short time earlier. While we will undoubtedly slay the Virus, perhaps we, like the English, will be surprised by an unexpected outcome. Perhaps the economic fallout remains to be reckoned and the challenge for the global economy is not fully factored into the calculus of the market. 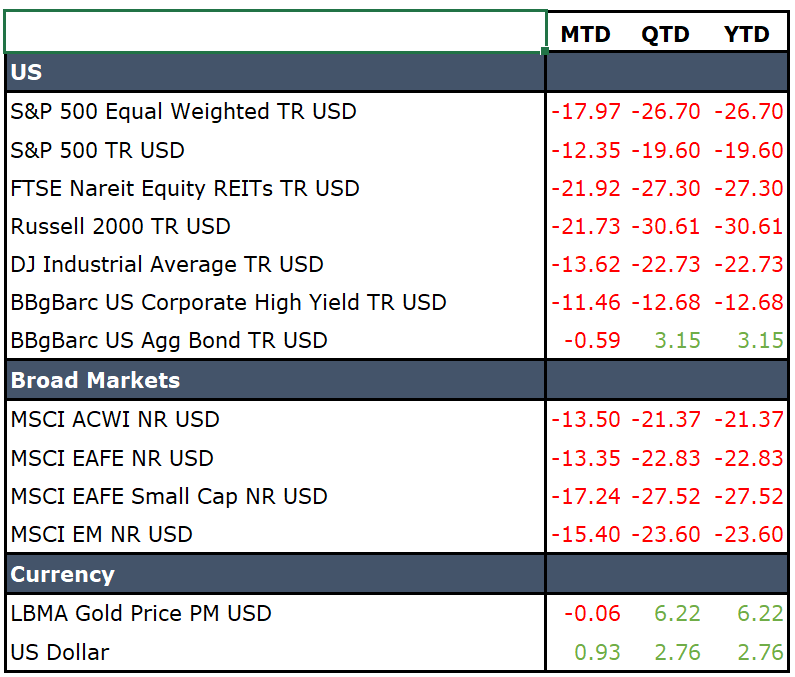 A few short weeks ago, we were more confident that the 10-year economic expansion would continue and the overvaluation of the market would extend through the election. Like the English in the waning days of the 18th century, we breathed easier thinking that we had temporarily dodged the economic bullet only to be surprised by the unforeseen impact of the governmental response to a global pandemic. That response has rocked economies around the world, and the full impact of the “social distancing” and “shelter in place” prescription have yet to be felt.

The S&P 500, the Dow, and the NASDAQ all hit new highs in February. Unfortunately, those new highs were followed by the swiftest decline in markets since 1987. A new low was set by most major equity markets on March 23rd with both the S&P and the Dow down approximately 35% from their all-time highs. Markets then improved through the end of the month, staging an impressive quarter end rally which left the S&P 500 down “only” 19.60% for the quarter. The rally off the bottom was significant enough to be labeled a “new” bull market by most measures, but it may prove to be a short bull phase inside the longer-term bear market which began in mid-February. 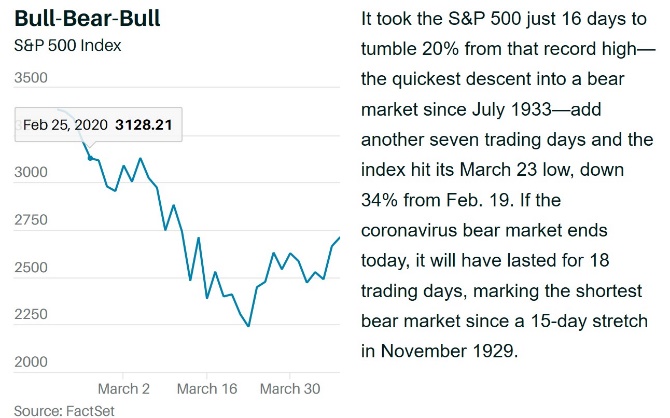 Few asset classes escaped the carnage created by the spread of the Virus. Gold was the notable standout, although measures taken by the Federal Reserve late in the month of March allowed some broader bond market indices like the Barclays Agg to end the quarter in positive territory. Small cap stocks and REITs took a particular beating as investors sold off positions due to concern about smaller capitalization companies’ ability to weather the coming economic storm. Investors were also concerned about the potential negative impact on REITs brought about by travel disruption and falling rents. At its lowest point, the Russell 2000 index was down over 40% It too bounced back late in the quarter, ending down 30.61% from the beginning of the year.

International markets were also hit hard as the Novel Virus was declared a pandemic and the pain spread across the globe. The MSCI EAFE index and the MSCI Emerging Markets index both dropped around 23% for the quarter. Like its U.S. counterparts, international small cap stocks bore the worst of the decline. The MSCI Small Cap Index closed the quarter down nearly 28% in dollar terms. For U.S. investors, dollar strength contributed to the negative returns. The strong dollar caused other challenges as well. It pressured emerging economies as they struggled to obtain enough dollars to service their dollar denominated debt, and it put additional pressure on dwindling U.S. exports.

Cornerstone portfolios were not immune to the market downturn. Initially, positive returns from the fixed income side of our portfolios provided significant protection. However, later in the quarter as speculators were forced to unwind leveraged positions and more and more investors sought to raise cash, bond markets were negatively impacted. This impact mitigated some of the benefit of our protective positioning. Further, as we noted previously, our REIT positions and overweight to value did not provide as much protection as we had anticipated. While our active managers in both asset classes did quite well relative to their respective benchmarks, both areas of the market were hard hit as growth strategies continued to outperform value in the current environment. Much of the negative impact in the value space may be attributed to the negative price performance of banking and energy stocks which are often well represented in value-oriented portfolios. However, our conservative fixed income positioning coupled with the strong performance of our value managers provided a significant element of protection. Most portfolios ended the quarter down significantly less than broader equity benchmarks. An additional benefit of our strategic allocation models and liability-driven approach to portfolio formation is the significant weighting our portfolios have in cash and various cash proxies. This positioning allows us to facilitate ongoing distributions without being forced to liquidate equities at an inopportune time. The high degree of liquidity also helped ensure that we were able to allow our bond managers to make it through the liquidity disruptions of late March without impact. During times of significant volatility, Cornerstone’s approach to rebalancing is also advantageous. We utilize ongoing distributions as an opportunity to rebalance. Early in the quarter, this led to the sale of equities at or close to the high, while late quarter distributions were sourced from cash and short duration Treasury securities. We also monitor our overall allocations continuously to take advantage of sudden drops in the market along with more significant dislocations. Typically, we accomplish this through systematic rebalancing as accounts move beyond our tolerance parameters. Given the speed and magnitude of this decline, Cornerstone utilized an accelerated rebalancing methodology which allowed us to capitalize on the late month rebound in bond markets and the significant decline in broader equity markets. However due to the lack of economic visibility and our concern that equity market may re-test their March low, we did not pursue a “full” rebalance. Rather, we chose to rebalance approximately half of the equity underweight brought about by the COVID-19 induced decline. We chose to move these funds into large cap domestic securities. This strategy honored our traditional counter-cyclical rebalancing program by acknowledging that equities may have reached their low and could rebound sooner than expected. By not fully rebalancing our portfolios, we also retain some “dry powder” that should act to dampen future portfolio volatility and allow us to deploy additional assets into equites should we experience additional equity declines. For the moment, we are retaining our value overweight because we believe in mean reversion. At some point growth and value will likely converge. It is worth noting that because many value-oriented companies have declined more than their growth-oriented brethren, value-oriented companies may also be more insulated as the negative impact on corporate earnings becomes evident.

We enter this new quarter hopeful that perhaps our concerns about the economic impact of global government’s strategy for addressing the COVID-19 outbreak are overblown. However, “hope” is not a strategy. We do not know where the bottom of this market may be, and we do not know exactly when the recession will end or how deep it may become. Our visibility is further clouded by the uncertainty surrounding the control of the viral outbreak. We are optimistic about the future of America, the American economy and ultimately the global economy, and our lack of ability to fully time such momentous events requires adherence to our systematic approach and reliance on diversification for protection. 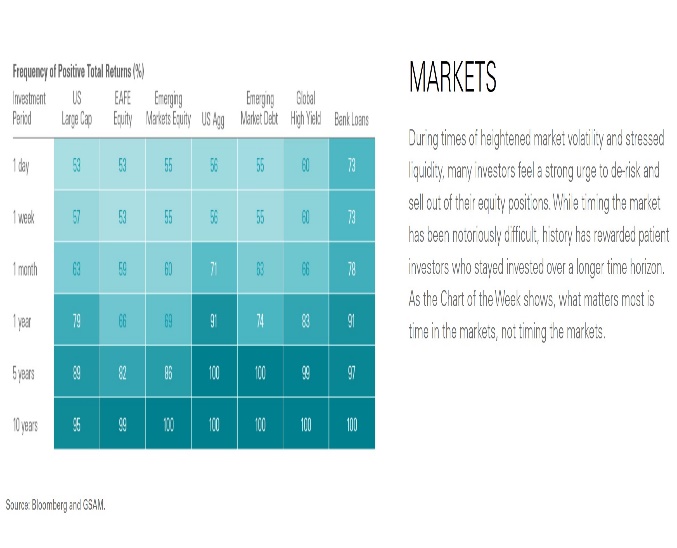 Markets go up 70% of the time. Trying to time the bottom of the market is not any easier than trying to time the top. Our partial rebalancing move reflects our traditional discipline and belief, while our macro overlay positioning provides some additional volatility mitigation and downside protection.

Perhaps for many of us this, situation represents the “worst of times” that we have experienced. “Social Distancing,” “Shelter in Place,” and “30% unemployment” are not quotes that I expected to be writing in a commentary about America and the American market. At the conclusion of A Tale of Two Cities, the planning of friends allows the heroes to escape France and return to England…what many of us have forgotten is that in the end Sydney Carton gives his life to save those he loves.

As we conclude the first quarter and look forward to Easter, consider the following: “A final thought on preparedness. For Christians and Jews, this is among the holiest weeks of the year, when in a word, all prepare spiritually for Easter and Passover. Both events are about passing into and out of a crucible. Inside these faiths, loss becomes endurable through the promise of deliverance. It’s worth remembering for at least one week.” – Daniel Henninger, Wall Street Journal

Indeed, as believers we know the One who gave His life for ours, and that makes all the difference. May we reflect His Light during this difficult time, bringing many to consider Him for far longer than this week or the span of this crisis. Our faith in Him and the life He provides is our protection, not the economic prosperity to which we have become accustomed.