The End of the Beginning ….

Perhaps some are breathing a sigh of relief: the 1st quarter of 2020 is over. The quarter began with such promise. It was a quarter which saw new highs set by U.S. equities, and yet also a quarter which witnessed the swiftest decline in those same indexes in over 30 years. Equities ended the quarter down, the month down, and will likely end this week down. COVID-19 has had a stunning effect on the health, confidence, and economies of nations around the world. From an insignificant number of hidden cases at the beginning of the quarter to over a million cases today, the virus has morphed into what some have called the worst global pandemic since the Spanish Flu of 1918. Yet it is hyperbolic statements like these that have led to confusion, shock, and fear. Records of the Spanish Flu pandemic suggest that between 17 million and 50 million people died from the outbreak. A recent interview with historian Nancy Bristow highlighted the grim reality of those years and the challenges that the U.S. faced in addressing the spread of that particular virus. Those challenges were not unlike those we face today. In 1918 Americans were a mobile people, they were active, and they did not want to change their behavior. Health authorities requested social distancing, requested that individuals wear masks, and debated the risks of social gatherings. Supposedly, information about the virus was suppressed in various countries, but openly discussed in others. Sounds much like today, does it not? Yet, so much has changed. In 1918 we did not have antibiotics, ventilators, or many other benefits of our modern health system. The concepts of remote work, virtual meetings, and digital computing had yet to be invented. So while we might say that human nature has not changed, our ability to address the physical manifestations of a global pandemic has significantly improved. However, the same dilemma that was present in 1918 is still present today, and it forms the crux of the challenge facing global leaders and health professionals around the world. That dilemma is the trade-off between efforts to protect people’s health and the impact those efforts have on economic output. As we head into the 2nd quarter of 2020, the impact of those trade-offs could not be more stark. According to various sources like Johns Hopkins, Covidtracker.com, and the CDC, the global death toll is 55,000 to 60,000 people. Terrible and dismaying yes, but orders of magnitude less than our example of the Spanish Flu. 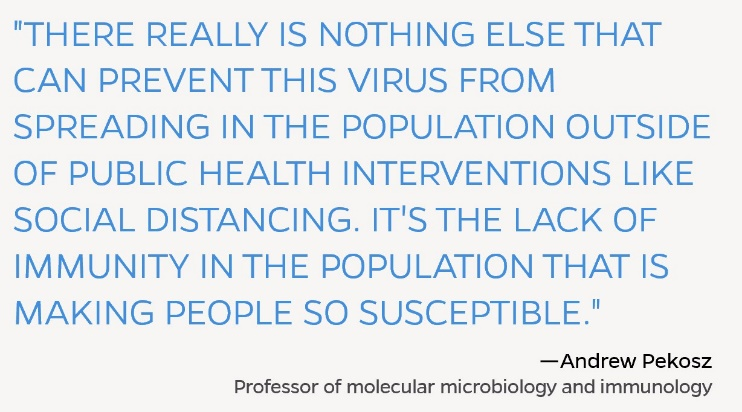 While the number of deaths will undoubtedly rise, it is a credit to the governments and health officials working to stem the spread of this disease that they are taking the value of each human life so seriously and seeking to do all in their power to heal and protect those who are ill. This endeavor is extremely costly from an economic standpoint. Further, this economic cost does not occur in a vacuum. We have noted over the last two years that we expected a corporately-led recession to end the long period of expansion that began in June of 2009. Our basic premise was that corporations had levered up and used that leverage to purchase their own stock. Corporations were utilizing financial engineering to boost earnings rather than reinvesting those earnings in projects, corporate infrastructure, and other productivity-enhancing opportunities. In 2018, rising interest rates put pressure on corporate refinancing activities. The Fed’s pivot in 2019 reduced this pressure, but companies continued to feel the pinch of rising labor costs and relatively weak global demand. 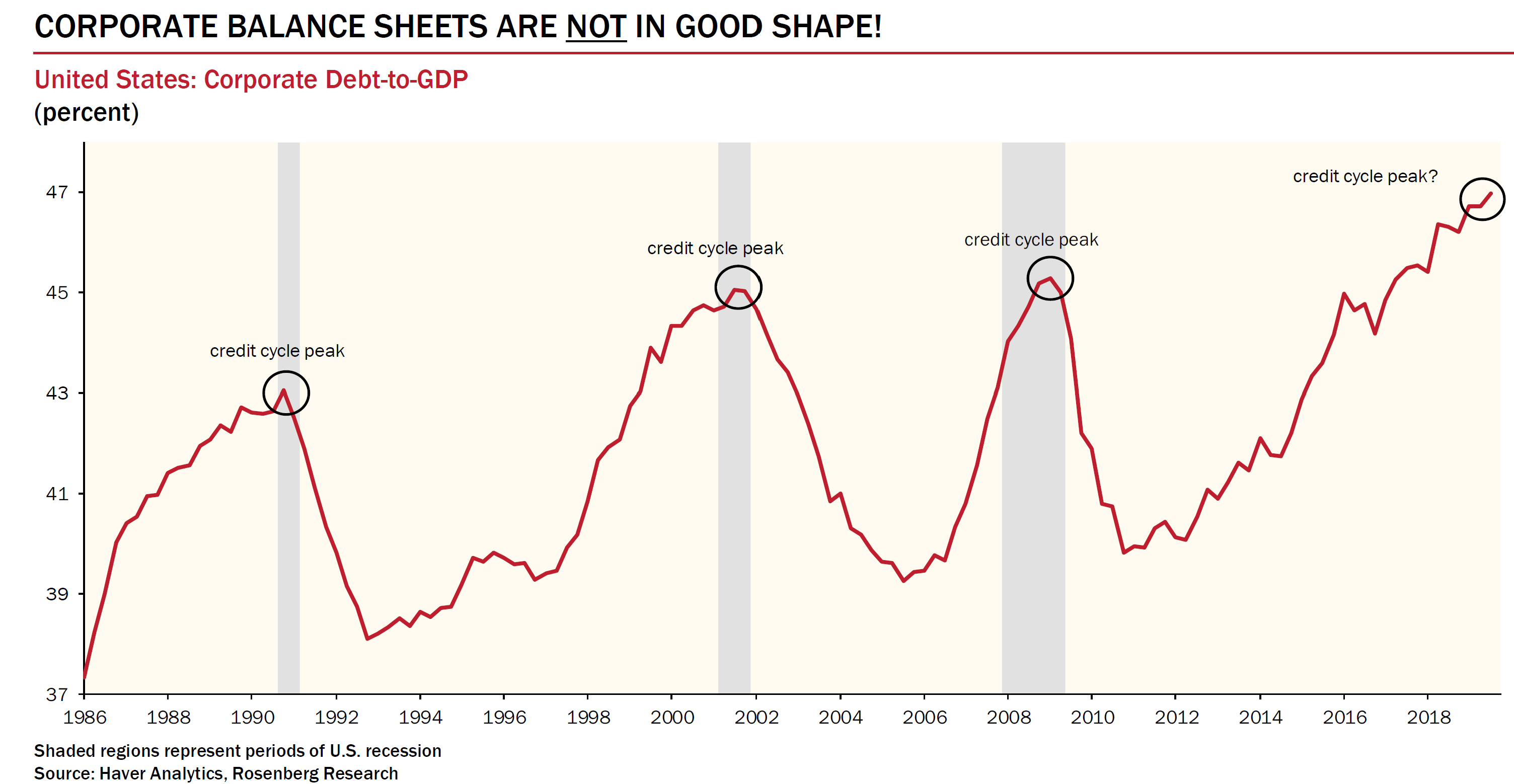 We were optimistic that with the support of the Fed, a strong U.S. consumer, and growing pockets of strength in international economies, the U.S. expansion could continue through the 2020 election. However, we remained concerned about the fragility of the U.S. corporate sector and the relative health of the global economy as well. As our quarterly economic summaries have shown, the economic environment was not extremely robust. Rather, the consumer was quite healthy and the highly-leveraged corporate sector was being supported by both the consumer and accommodative monetary policy. Initially, the Chinese response to the virus created a supply shock that reverberated throughout the global economy. As the virus spread and the Chinese/ Asian containment model became the accepted method of addressing the spread, a massive demand shock was created. We say created because we believe that the “wave” has yet to crest. The virus is still spreading, the curve has not yet flattened in the U.S., and in much of the world it has yet to begin rising in an exponential fashion. 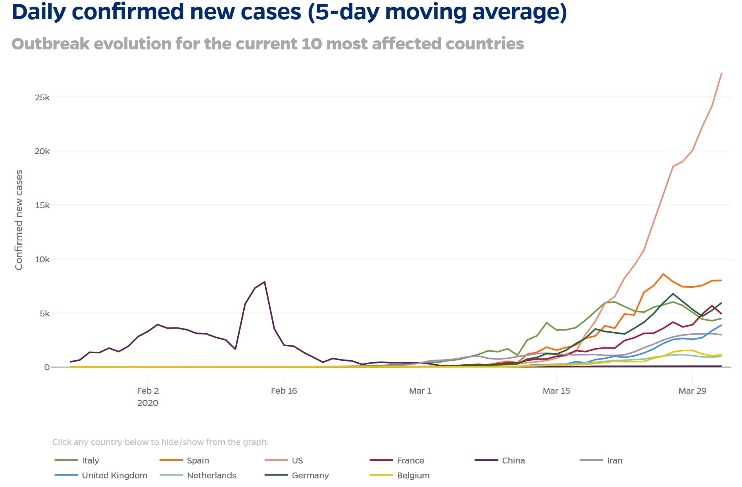 As governments tighten controls on the population and extend those controls for longer periods of time, the probability of true demand destruction grows. The global economy must come to grips with the fact that as it works through the initial supply shock brought about by the disruption and spread of the virus, it must now also contend with the growing demand shock caused by efforts to control and eradicate the virus. The potential impact on the consumer and on consumer demand is unprecedented, and efforts to quantify it have largely fallen short. Through the efforts of the Federal Reserve Bank and the fiscal stimulus packages approved by Congress, nearly $7 trillion of aid is available to shore up the U.S. economy. If that number seems stunning, it should. U.S. GDP is approximately $21 trillion. The combined impact of the aid represents nearly a third of our annual economic output! The challenge, of course, is that in our efforts to control the virus we have shuttered nearly a third of the economy, and the relative impact on the consumer in the next few months is unknown. The effect of the shut down on U.S. corporations is already being felt. As investors grapple with the potential current and future impact of virus containment measures, they are reflecting that battle across the publicly traded markets of the world. Over the last month, valuations in key sectors of the market have been significantly reduced. Commodity valuations have fallen, and fixed income spreads have widened even as interest rates have declined. In short, global markets are forecasting a recession.

During the 1st quarter, large cap domestic stocks dropped by nearly 25% from their high in mid- February. The Dow Jones Industrial average dropped 22.73% for the quarter, while the S&P 500 was little better down just under 20% for the same period. Small cap stocks have been hit hard, with the Russell 2000 down 30.61% since the beginning of the year. International equities took quite a hit as well, with the MSCI EAFE falling 22.83% on a year to date basis. Emerging markets and international small cap faired a bit worse, falling 23.60% and 27.52%, respectively. Due to the aforementioned demand shock and the Russian/Saudi price war, oil experienced its worst quarter in years falling nearly 67% during the quarter and reaching levels last seen in 2002.

While gold and bonds were both positive for the quarter, they also experienced significant volatility. Many sectors of the bond market actually finished the quarter in the red. Liquidity disruptions brought about by flight to safety trading and deleveraging significantly affected bond spreads. Treasuries, Agencies, corporate bonds, and even municipals were impacted as investors covered margin calls, exited leveraged trading positions, and moved to cash. Late in the month, the various trading facilities put in place by the Fed along with significant direct market purchases helped calm markets and tighten spreads. However, the destabilization in the bond market negatively impacted the returns of many bond managers and added to concerns regarding the fragility of the overall financial system.

For the most part, financial markets set a new low on Monday March 23rd. As the Fed’s actions took affect and the fiscal stimulus package was approved, markets rallied into the end of the month. And so, we find ourselves at the beginning of the 2nd quarter of 2020. Economic data has yet to fully reflect the devastating impact of the Novel Corona Virus containment measures on the U.S. economy, but what data we have suggests a significant and growing negative impact. Unemployment claims over the last two weeks have ballooned to approximately 10 million with expectations that this number will likely double in coming weeks. U.S. PMI data is already beginning to decline. The most recent ISM Manufacturing data indicates that manufacturing has already begun to contract, and we expect that the ISM Non-manufacturing survey will be quite poor as well. The data will certainly get worse over the upcoming weeks as the full impact of the economic shut down ripples through the data tracking services. Various research teams have sought to quantify the potential impact on GDP, and estimates have seen frequent revisions. 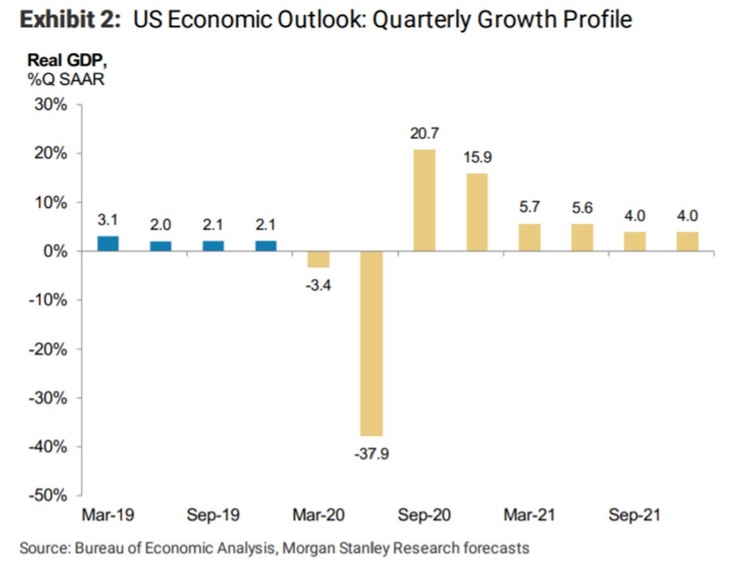 A current survey suggests that 1st quarter GDP will likely be down in the high single digits on an annualized basis. Estimates for second quarter GDP range from -25% to as high as -38% according to Morgan Stanley. However, remember that those are annualized numbers. If we assume a non-annualized drop, we are looking at something on the order of 2% for the first quarter and perhaps 7%-8% in the second quarter. This represents a real decline in output of approximately 10% set against the direct fiscal stimulus of about the same amount and indirect monetary stimulus that is more significant.

The $4 trillion question is will it be enough to offset the output drop? In our view it is unlikely that any amount of stimulus can fully offset the impact of this disruption. The economy is quite likely already in recession, and the shocks we have outlined will take their toll on businesses and consumer confidence. We believe the monetary and fiscal stimulus will go a long way toward pulling us out of the ditch more quickly and may even add some additional fuel to our economic engine as output begins to ramp back up. However, confidence will be shaken and corporate earnings will be negatively impacted. When we consider the hit to earnings and the follow-on effects in the economy, it is difficult to envision the market rocketing back to its February highs in the near future. Over the next 6-9 months visibility will improve, and we will be able to better ascertain what the likely trajectory of earnings will be. It is important to note that during significant recessionary events, the market normally acts as a leading economic indicator in both directions. So as visibility clears the market will likely lead us out of this downturn.

Given the speed and depth of the market decline, it is likely that the market has priced in both a significant amount of economic pain and a significant hit to earnings. However, while the market has dropped quickly and significantly, we are not convinced that it is fully reflecting the economic impact of current containment measures. From a negative viewpoint the virus infection curve continues to rise, governments are being forced to ratchet up and extend containment measures, and corporations are being forced to cut costs and employees despite government aid. On a more positive note the flexibility and power of the U.S. healthcare, technology, and manufacturing infrastructure are being brought to bear on this challenge. It is rarely wise to underestimate American ingenuity. We find ourselves, like Winston Churchill, aware that a sleeping giant has been awakened. We remain confident in the ingenuity and capacity of that American giant, and although the end is not yet in sight, we believe we have, as Churchill noted, “reached the end of the beginning.”