There’s almost no chance of a recession this year.

“Speculators are obsessed with predicting-guessing-the direction of stock prices. Every morning on cable television, every afternoon on the stock market report, every weekend in Barron’s, every week in dozens of market newsletters, and whenever business people get together.” – Seth Klarman

“Men, it has been well said, think in herds; it will be seen that they go mad in herds, while they only recover their senses slowly, and one by one.” – Charles Mackay

Investors entered the week convinced the end of the world was nigh. Markets opened down on Monday and kept falling. By the end of the day the Dow was down approximately 37% from its high set just a month or so before. Despite numerous actions taken by the Fed, the situation looked grim. However, markets were oversold, and selling pressure gave way to a significant three-day rally. Kicked off by a tremendous 2,100 point rise in the Dow, markets in the U.S. and around the world moved higher on hopes that Congress would pass a large economic stabilization package. Initially estimated at a little over 1 trillion dollars, the final package passed by the U.S. Senate was over 2 trillion dollars. Markets rallied on the rumor and ultimately sold on the fact. Friday brought final approval by Congress, but it was not enough to keep markets out of the red. The S&P 500 dropped throughout the day, ending the three-day rally with a negative exclamation point. However, even with the drop equity markets managed to finish the week in the green. The S&P 500 was up more than 10% for the week, and the Dow, pulled higher by a resurgent Boeing, rallied nearly 13% off its Monday low. Quite a show given the massive uptick in jobless claims. 3.3 million claims were reported for the week ending March 21st, massively eclipsing the previous record of 695,000 set back in the 1982 recession. 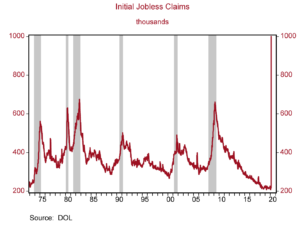 This is the first real taste of the economic slowdown brought about by the government’s efforts to stem the tide of COVID-19 cases. Unfortunately, those numbers are none to good either with cases continuing to rise in the U.S. and around the world. While China and some other Asian countries seem to be improving, the Western World is clearly still in an uptrend. 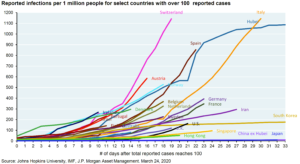 “I want to thank Democrats and Republicans for coming together and putting America first,” President Trump said in remarks Friday in the Oval Office. He added, in a nod to the size of the package: “I never signed anything with a T on it.” – President Trump, WSJ

The positive news on the virus front is that the U.S. is finally gaining ground from a testing perspective and is beginning to bring its industrial might to bear on the challenges brought about by an unprepared health system. It remains to be seen if growing constraints placed upon a U.S. population used to significant personal freedom can bring about the slowdown in virus transmission seen in China and other countries who may place less emphasis on personal freedom. Regardless, it certainly appears that federal, state, and local governments are going “all in” on virus suppression. As more and more areas of the country limit business activity, the economic affect will be dramatic. As we noted in our last missive, 2nd quarter GDP will likely be extremely negative with estimates ranging from an annualized rate of -10% to -24% or more in some cases. In summary, the agreed upon governmental response to this virus has brought about a global supply shock followed by a global demand shock. As if these two challenges to the global economy were not enough, they are being exacerbated by the oil price war initiated by Saudi Arabia and Russia. This price war also puts significant pressure on U.S. shale production at a particularly inopportune time.

So why, one might ask, did the market rally in the face of so much negative information? There are many possible answers to that question and perhaps the best answer is: “we don’t know!” In the short term it can be difficult to evaluate market moves. However, there are a number of mitigating factors that likely led to this sharp and significant rally. First, selling pressure was overdone, and as the market turned, short covering accelerated the upward move. Sharp rallies following significant declines are common, and modern high frequency, algorithmic, and hedge fund trading strategies all contribute to the speed and intensity of such moves. In this case it is likely that there were some fundamental factors at work as well. Over the last two weeks the Fed initiated a significant number of programs designed to bolster liquidity, stabilize credit markets, and provide additional support to the banking sector. Between March 12th and March 23rd the Fed initiated a series of actions with a monetary impact far greater than those employed during the Great Recession. These actions culminated in the Fed indicating on Monday that its Treasury and Agency purchases would be unlimited and that it would also purchase corporate bonds in both the primary and secondary markets. (In an attempt to address the dislocation brought about by bond investors seeking to raise cash quickly and at virtually any price, the Fed specifically noted it could purchase corporate bond ETFs.) As a result of these actions, spreads narrowed slightly and Treasury yields declined. More importantly, the credit markets were reassured. While investment grade corporate bond spreads remain wide by historic standards, trading in corporates, municipals, and mortgage-backed securities smoothed out. Investment grade municipal spreads in particular drifted lower throughout the week. The importance of these actions by the Fed cannot be overstated. In times of duress it is essential that credit markets continue to function. Given the unique nature of this crisis, the inability of companies and investors to easily trade and access liquidity would be catastrophic. Market action was also impacted by the growing likelihood of the passage of a massive economic stabilization bill. The Coronavirus Aid, Relief, and Economic Security (CARES) Act was passed by unanimous vote in the Senate on Wednesday, ratified by the House’s vote on Friday, and immediately signed into law by President Trump.

In summary, the CARES Act provides the following support for the American economy: 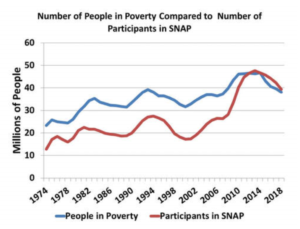 Taken in total this is a massive economic passage. Together the monetary and fiscal policy response dwarfs the response in 2008 and exceeds any direct fiscal intervention by the U.S. Federal Government in history.

U.S. GDP is approximately $21 trillion per year, and therefore it is relatively easy to see that the aid package is designed to fill the hole brought about by a government-led pandemic intervention lasting 1-2 months. When leveraged with the Fed’s monetary actions this is indeed a powerful factor and one which clearly had a hand in the market’s rally this week. However, the question remains: “is it enough?” Will these combined actions and those of other governments and central banks around the world be enough to support consumer-led economies while those economies are massively restricted due to COVID-19 mitigation efforts? In our view it is too soon to tell, and certainly too soon to say that the market is out of the woods. By some definitions the mid-week move was enough to put the Dow back into a bull market, but even so we would remind readers that bull market rallies can be experienced in the midst of a broader bear market. Visibility remains extremely limited, and while markets are well off their highs, the extent of the economic damage remains to be seen. The economy is slowing rapidly, and investors will be forced to review a growing barrage of negative economic numbers. Earnings estimates will likely be revised downward multiple times in coming weeks, and the number of those infected with the virus will continue trending upward. While it is possible we have set the low for this crisis, we believe that it is more likely that the low is still to come. In our view, this is a time for caution. Stocks are much cheaper than they were, high yield bonds are trading at levels last seen during the Great Recession, and some energy securities are hitting levels seen 20 years ago. Opportunities certainly exist, and some additional exposure to equities may be warranted; however, market bottoms often take a significant time to develop as previous lows are re-tested and negative information is processed. Consequently, care must be taken and liquidity must be preserved to insure against forced asset sales at “fire sale” prices. Perhaps the immediate crisis has been averted, but, in our view, an immediate return to the “good ole days of February” is unlikely anytime soon.