A couple of months ago we kicked off a new year, a new decade, and a new deal with China. The market moved higher on news of the USMCA deal, the phase I deal with China, and the efforts of the U.S. Federal Reserve. While there were known problems: manufacturing contracted during the second half of 2019, earnings growth declined throughout the year, and margins softened just to name a few, the election year was shaping up rather positively. Then along comes the classic Black Swan…Covid 19 from the virus SARS-CoV-2. A “Novel” virus as they say…aptly named since we suppose it is truly “new”. A review of the CDC website provides all sorts of intriguing information…for example it’s comforting to know that like SARS and MERS, SARS-CoV-2 originated from bats. Well perhaps it’s not exactly comforting, but knowledge about these sorts of situations always provides a level of rationality that can easily be lost when listening to the 24 hour news cycle and watching the market drop precipitously!

The Virus is clearly dangerous and presents a significant threat to the global economy. 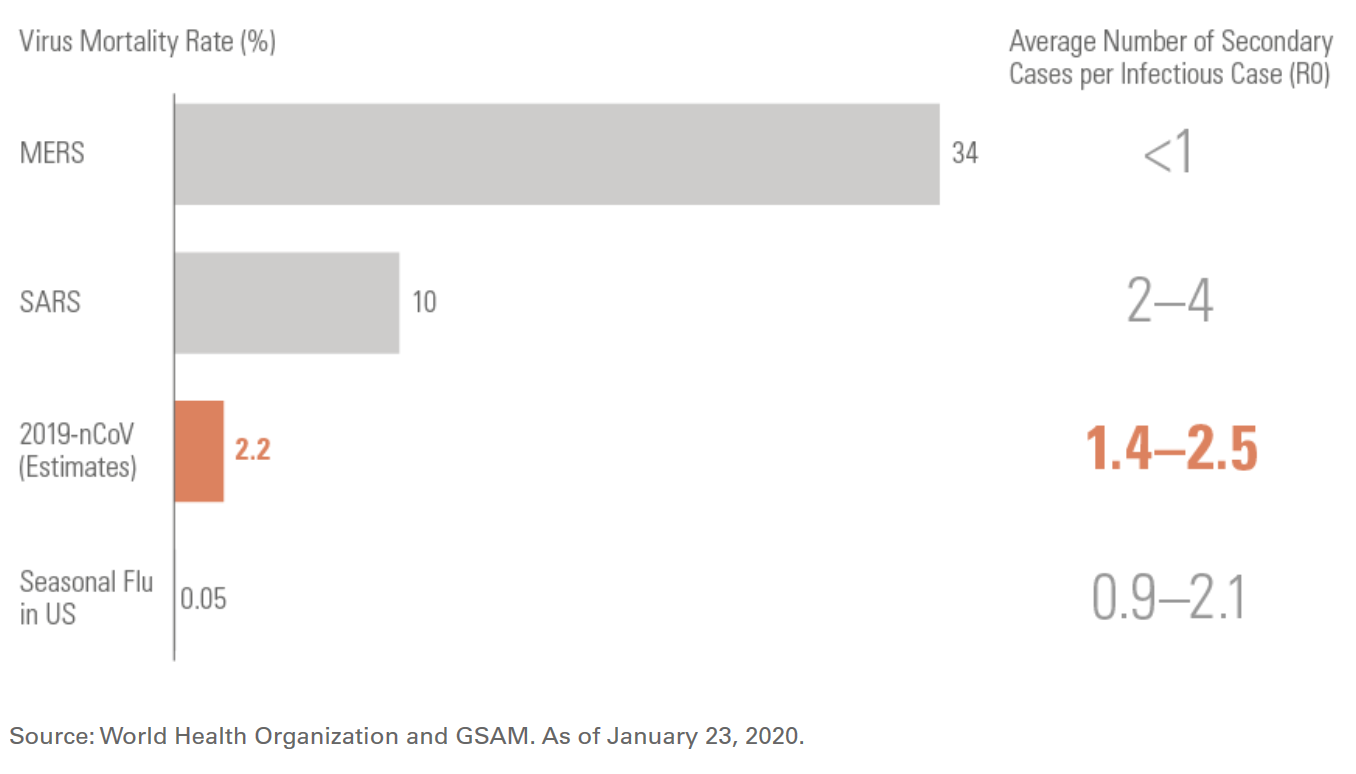 However, it seems far less threatening than other significant health events and virus outbreaks. The global situation remains fluid, but even with more recent data the WHO estimates the global mortality rate is probably 1-3%. Further it appears that the virus is less threatening in children, a positive note to be sure.

While it is difficult to make comparisons, there have been many different global disease outbreaks over the last 30-40 years and they have all had an effect on markets and the economy. 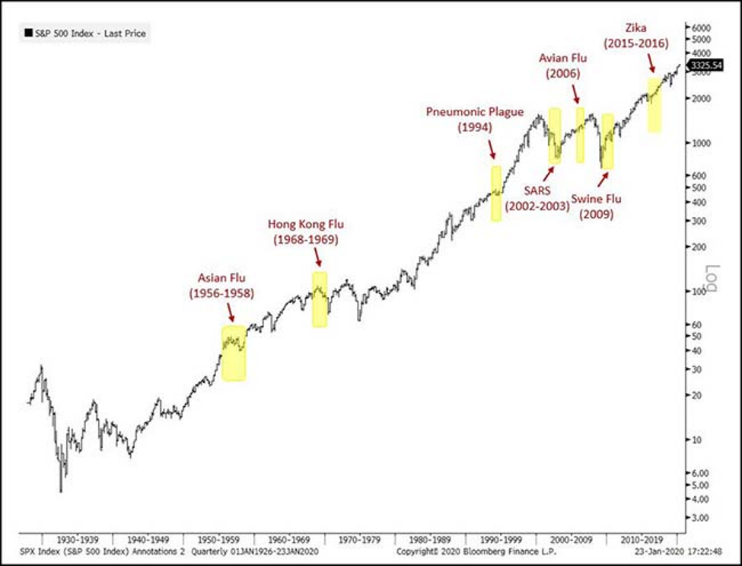 In most cases the effects of the outbreak are relatively temporary and can often be difficult to separate from other factors. For example SARS came into play during the late stages of the 2000-2002 bear market and was followed rather quickly by both economic and market improvement. In many cases it appears that the effects of global pandemics and other significant health issues may be limited by their locale. Ebola is clearly an extremely dangerous disease with very high mortality rates, but most cases have been confined to Africa and consequently the impact on the global business community has been more muted. As we have noted past comparisons may not be completely applicable, but the following graph from Goldman Sachs helps illustrate both the transitory nature of such events as well as the rather limited impact on GDP. 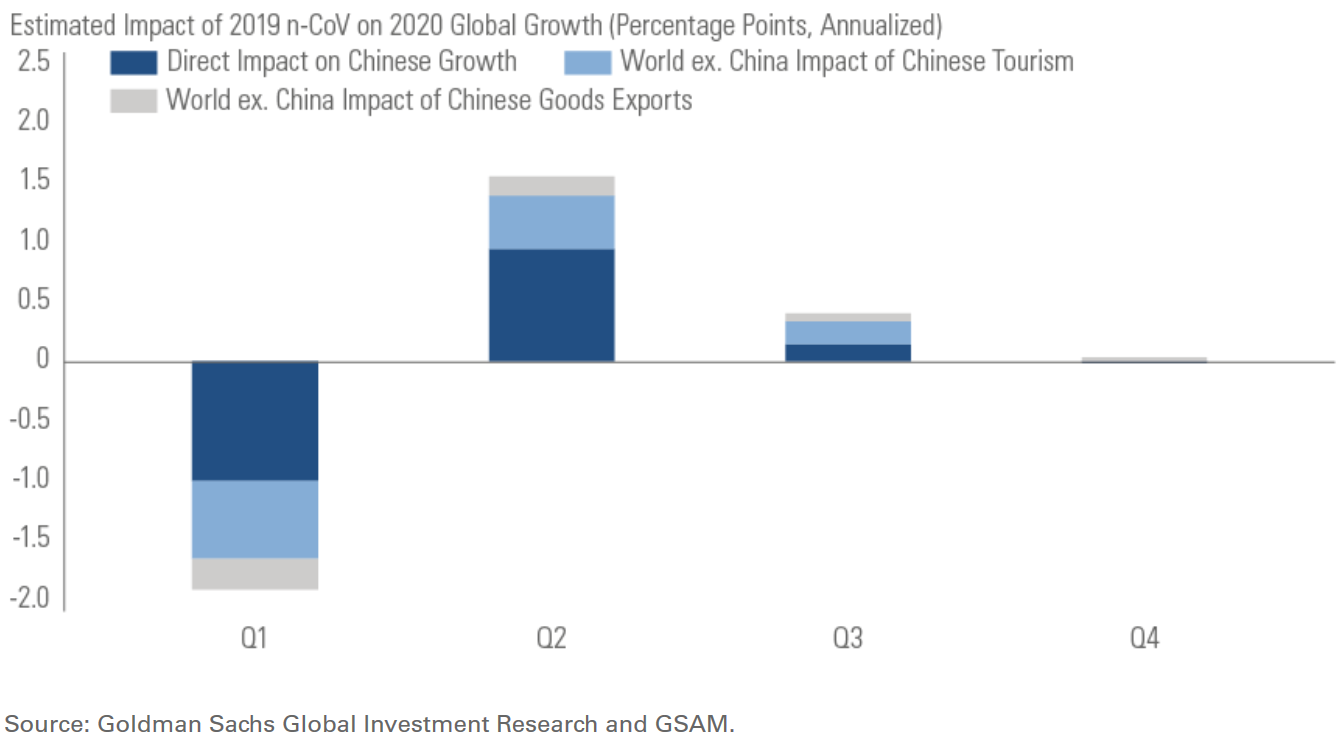 In the case of Covid-19 the primary risk, in our view, is the knock-on effect to the global supply chain brought about by virus containment measures. By all accounts, China has done an excellent job of containing the virus, but that containment comes at a price. Global supply lines are disrupted and with the spread of the virus to South Korea, Italy, and other places around the globe the risk of further disruption grows. Mix in the personal risk element of disease and you have a toxic cocktail perfectly fashioned to arouse fear in the global investment community and send markets around the world on a sickening roller coaster ride.

As many have noted the markets moved higher throughout 2019, and despite the growing threat of the Corona virus markets continued their ascent in 2020. A narrowing market, complacency, the speed of the ascent, along with other factors led to a market that was significantly “overbought” and due for a correction. One might say that the market was priced for perfection. The viral outbreak provided the perfect “pin” to prick the balloon and initiate a wild downward flight. The recent move down has been breathtaking in its speed and intimidating in its magnitude. It can be difficult for investors to adjust to the larger numbers that some indexes have attained. Consequently drops of “1,000 points” or more seem particularly threatening even though they may represent a relatively small percentage decline. Regardless the explicit threat to personal safety along with the implicit threat to the global supply chain brought about by Covid-19 has sent the market sharply lower and raised the specter not only of a significant correction but also a potential bear market. 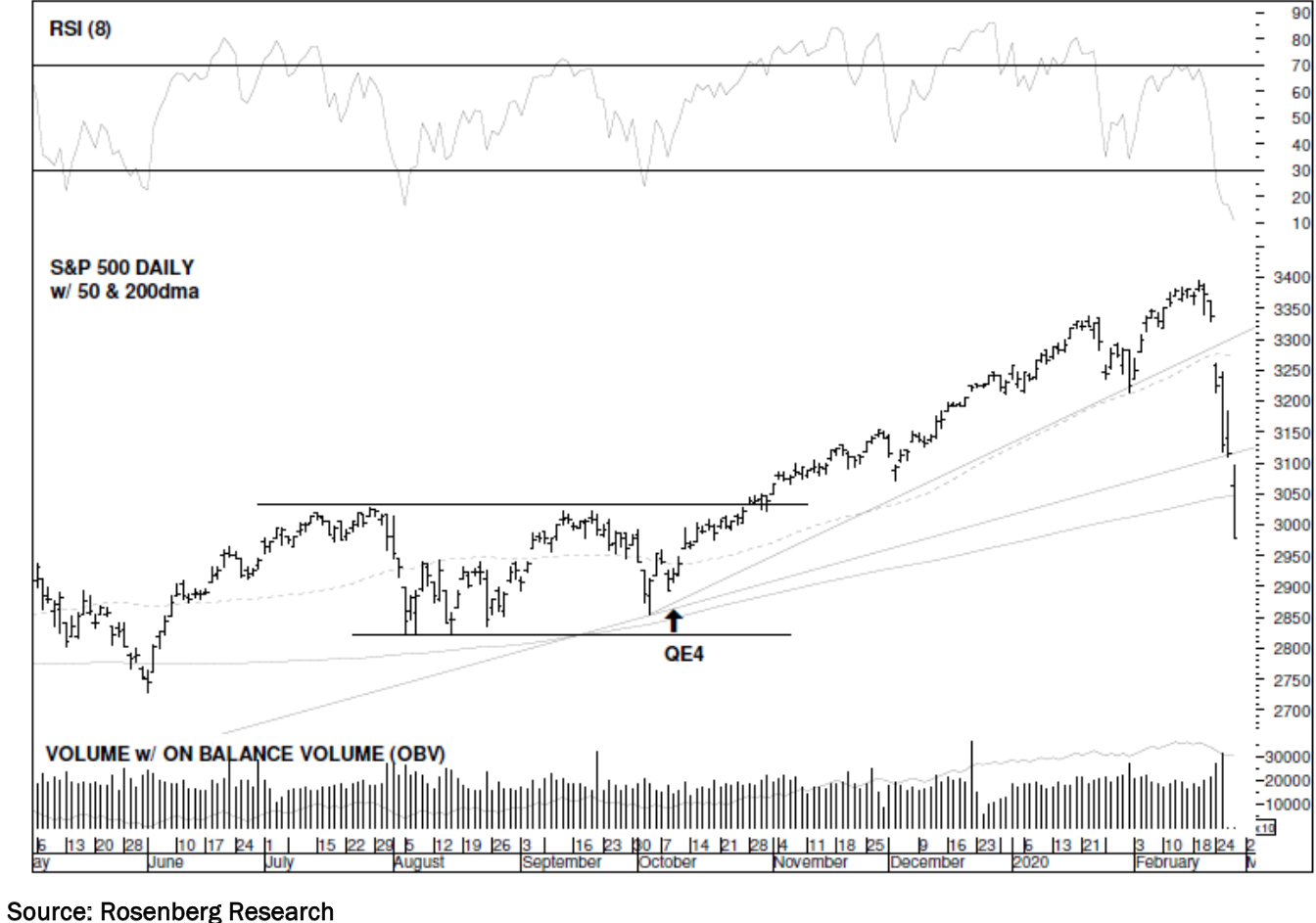 While a significant bear market is possible we believe the immediate threat of such an outcome is minimal. We believe it more likely that we are currently experiencing a classic short term correction.

“From late-December through mid-January, markets began to display increasing evidence of being overextended to the upside, overbought and over-believed. All that was missing was a catalyst to bring the party atmosphere back to the real world. The outbreak and subsequent spread of the coronavirus provided that catalyst.” – David Rosenberg

We could not agree more. This market has been moving higher on multiple expansion while ignoring virtually all existential threats. As we have noted the FED’s pivot, the strength of the U.S. consumer, along with the recently brokered trade deals has, in our view, led to an increased probability that this economic expansion will continue to through the 2020 election. However we are late in the economic cycle, and as we have noted equities in the U.S. have been priced for perfection. This drop could be the signal of a coming recession, but it is more likely that it is a corrective phase seeking to establish a supportive floor for the recent advance. Significant support seems to exist around the 2750 to 2800 level on the S&P 500 and around 25,500 on the DOW. Further, very little has changed economically. While it is certainly true that there is likely to be supply chain disruption, particularly with China, The disruption is likely to be minimal and will probably fade relatively quickly. Supply chain disruption is also limited by the amount of reliance on any particular country, and while the U.S. has some high profile engagements with China (Apple). The graphs above show the more limited scope of the overall relationship. The U.S. consumer remains quite healthy and manufacturing data has improved recently. The FED has indicated that they will support the economy, and while there is little they can do to avert a full blown supply shock it is unlikely that the Coronavirus leads to that more dramatic outcome. The recent drop in the market has led to oversold conditions and fear based indicators have soared. This type of action is similar to what we would expect from other dramatic transitory events like hurricanes, earthquakes, terrorist events, national strikes, etc. 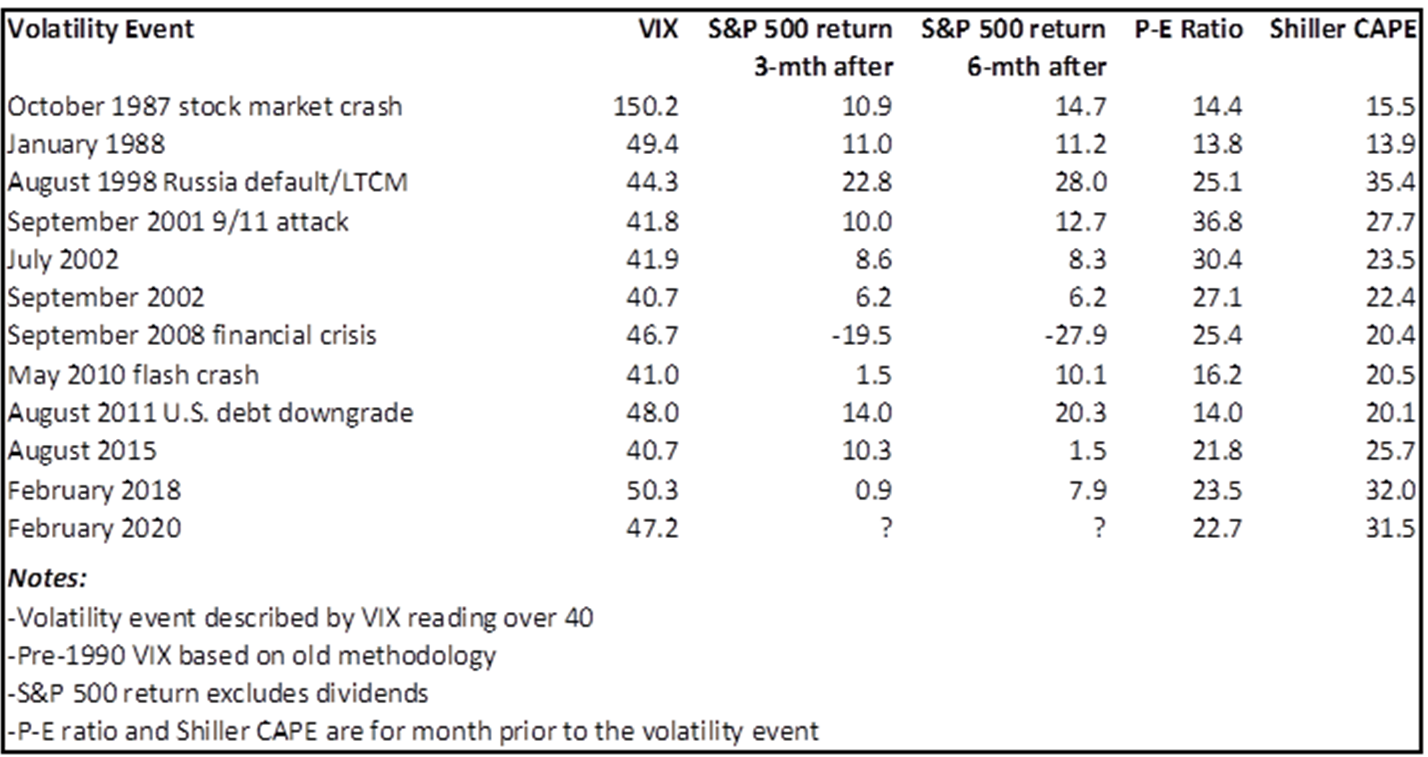 As the table above indicates most crises of this nature pass relatively quickly and the market recovers swiftly. In such recoveries the market often recovers most of the ground loss, but may also then move sideways building a base before moving on to new highs. It is difficult to project the forward path from this point, but we do believe that the market is likely to recover over the next few months while at the same time building a stronger line of support. We should also note that diversified portfolios have provided a significant amount of protection during the recent decline.

While equities have dropped significantly, bond yields have also declined leading to significant price improvement in the fixed income portion of portfolios and offsetting the negative returns of equities. Cornerstone’s fixed income positions, along with some of our more defensive active managers have helped offset the decline. It can be very difficult to discern when a correction is ending or when a bear market is beginning, and it is during such times that reliance on the structural soundness of our portfolios provides a great deal of comfort. We do not believe we can time such events, but we can tilt our portfolios to add protection or to take advantage of unique opportunities that such events may provide. Currently we believe that our underweight to international equities coupled with our value tilt and our defensive fixed income position should allow our portfolios to weather the current volatility. We will continue to look for additional opportunities that this fear based response may offer.